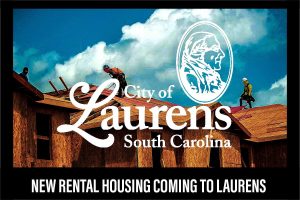 On Tuesday, May 3, 2022, City Council held a special called meeting to approve the sale of City of Laurens property just off East Hampton Street in the area known as “Holland Hill.” The 6-acre property is being purchased by Angel Three Development of Greenville, SC for a purchase price of $200,000.00. The sale is expected to be completed in thirty days. Upon closing and after due diligence, the developer has indicated work will begin to develop market-rate apartment housing. If current plans are brought to fruition, this new complex will be the first market-rate apartment complex constructed in the city since the Westside Manor complex on West Main Street was constructed in the 1980s.

While Laurens has recently received attention from those wishing to build single-family homes, according to Mayor Nathan Senn, it has been more difficult to attract those wishing to build apartment-style housing. “The difference is the ongoing nature of the investment. If you build a house, you can sell it and be done. If you build an apartment complex, it must be owned and managed over a longer term. So, the challenge is finding the right individuals to have that sort of long-term relationship with our city.”

With this new rental housing, the city will be better positioned to retain strong educators, Presbyterian College graduate students, hospitality and manufacturing employees, as well as those who work in public service. According to the Mayor, Laurens Police Department has interviewed potential employees interested in moving to the area, but they have struggled to find a place to rent that is not “Section 8” government subsidized housing. These new apartments are also expected to provide housing opportunities for individuals who earn a good, steady income, who may have issues with their credit history or those who may be saving to make a down payment for a future home purchase.

The sale of this property will also provide a new source of revenue to the City. The land to be purchased has been unoccupied for decades and, since it is owned by the City of Laurens, has generated no tax revenue. With the construction of this new housing, revenue from property taxes will be generated from the property, and local businesses are likely to see an increase in patronage as the apartments will be a mere 1.5-minute walk from the Square.

City leaders are also excited about the potential of the project from a responsible growth perspective. Rather than encouraging sprawl at the edge of existing city limits, this anticipated housing will take advantage of underutilized space which is in the heart of the city. “This simply makes better use of our resources in a variety of ways,” said Mayor Senn.

In addition to providing market-rate housing, the sale of the property will provide funds to the City for the long-overdue replacement of the “City Barn,” the facility which serves as the base of operations for the Streets and Sanitation Department.

Angels Three Development representatives became interested in Laurens following a welcome reception sponsored by the City of Laurens in April 2019 announcing the City’s now-familiar tag-line, “Laurens is Open for Business.” In meetings with the Mayor and City Administration that followed, they were charmed by the economic opportunities present and anticipated in the City of Laurens. The property Angels Three will purchase falls within the Opportunity Zone created under the Tax Cuts and Jobs Act of 2017. This act was established under the Trump administration with strong support from Senator Tim Scott. This program creates opportunities for investors to support small communities with property redevelopment and economic revitalization efforts. In exchange for their investment in these communities, as long as this investment is maintained for 10+ years, investors are able to avoid capital gains taxes while seeing a return on their investment. And, of course, the surrounding community benefits from the substantial investment in their redevelopment. Because of the strong leadership and pro-business environment of the City of Laurens, Angels Three Development decided to make an investment in the city’s future and help meet the city’s need for quality rental housing in the process.

The City of Laurens looks forward to the economic impact the development will have on the community as a whole, and the continued beautification of the city, which boldly claim the title of ‘Pride of the Piedmont’.