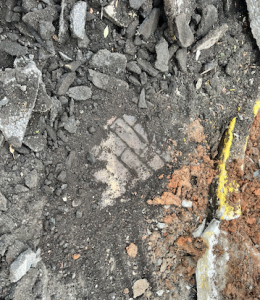 The renovations on the Square in Laurens have unearthed some real history. While removing the asphalt on the Square workers revealed the old bricks that are said to have paved the area back in 1907.

The workshop scheduled for 5:30 pm at City Hall is a think tank, open discussion among City Council about the options and feasibility of removing the asphalt around the Square to reveal more bricks.

“We want to be good stewards of public resources and our town’s history. That includes public investments made over 100 years ago.” said Mayor Nathan Senn. “We were led to believe that the condition of the brick streets paved in 1907 would be too poor to use and too costly to uncover. As it turns out, neither of those things may be true. Construction workers have uncovered sections of these brick streets and discovered that they are in surprisingly good condition and the 4” layer of asphalt on top did not stubbornly cling to them as expected.”

There are lots of factors to consider, and this meeting provides City Council an opportunity to see what has been uncovered and weigh in on the issues so an informed decision can be made. If feasible, this could provide an opportunity to do what many people have hoped, uncover the brick streets which have been hidden since at least the late 1940s.

“It has been decades since the Square has been repaved, and the condition of our streets and pedestrian crossings is closely linked with our efforts to improve ADA access,” said Senn. “This area is well overdue for paving and sidewalk repair, but it is just one of the areas across the city we have identified as needing work. In fact, we are requesting state grant funding for more than 16 miles of sidewalk building and repair across the city.”