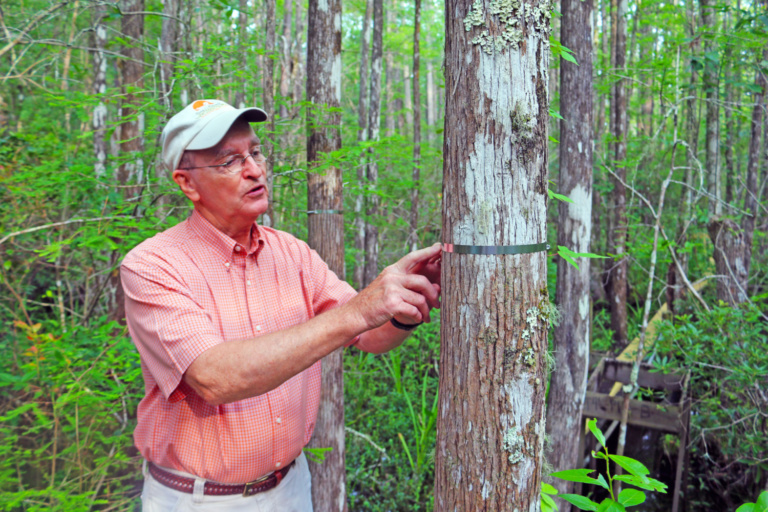 A veteran Clemson professor stationed at the university’s coastal research outpost in Georgetown County has been recognized by his peers for continuing leadership in wetland science and education.

William Conner, based at Clemson’s Baruch Institute of Coastal Ecology and Forest Science (BICEFS) in Georgetown, S.C., was recently honored with a special Society of Wetland Scientists (SWS) 40th Anniversary Award for his high level and sustained contributions to wetland research, practice, education, communication and support to the Society.

The award was formally announced Dec. 1 at the SWS 2020 Virtual Conference.

After earning his Ph.D. in Forestry from Louisiana State University in 1988, Conner arrived at BICEFS, located on the 16,000-acre Hobcaw Barony where scientists have studied the coastal environment for over 50 years, two years later just after Hurricane Hugo struck the South Carolina coast.

Hugo’s maximum sustained wind speed of just over 135 mph is the highest on record for a hurricane in South Carolina, according to the state climatology office. Causing $9.5 billion in damage, Hugo was the costliest storm in American history, and 61 deaths were attributed to the storm.

“I moved here in February of 1990,” Conner says, “and the main emphasis of everybody around was Hugo research and how were the forests going to respond with that disturbance and how long was it going to take for them to recover.”

Conner, a professor in Clemson’s Department of Forestry and Environmental Conservation, has continued his research on the impact of hurricanes and a multitude of other aspects on coastal ecology, along with his colleagues at BICEFS, for the 30 years since.

During his career, Conner has garnered over $4 million in research grants and contracts, authored or edited three books and 32 book chapters and had 93 referred journal papers and 80 other scientific papers and reports, as well as given 310 presentations as presenter or co-author.

In 2010, Conner was awarded Clemson University’s highest agricultural honor, the Godley-Snell Award for Excellence in Agricultural Research, and he was selected as Fellow of the Clemson University Institute for Parks two years later. Conner also received the SWS President’s Service Award in 2013.