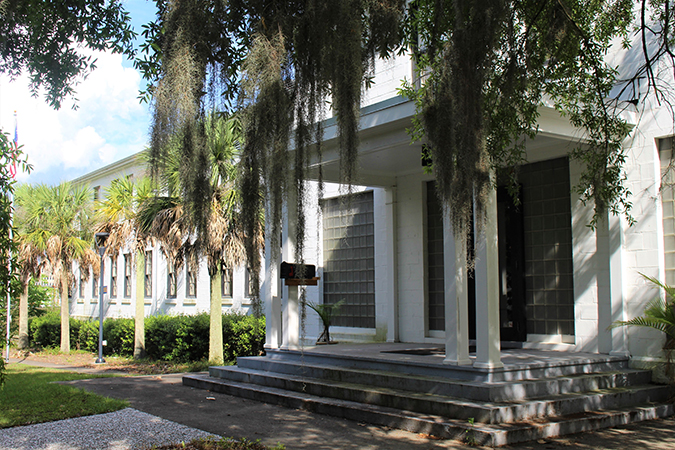 In its 45th year serving the South Carolina coast, Coastal Community Foundation has secured a permanent home. With a generous gift from Charleston real estate investor Frank Haygood and his wife, Kristi Haygood, the Foundation purchased and will be relocating its headquarters to a restored office building in the Charleston Naval Hospital Historic District in North Charleston.

While the former Naval Base has seen new businesses and organizations move in over the past few years, the Naval Hospital Historic District has remained mostly vacant and in need of revitalization. The opportunity to help shape this area’s future aligned with the Foundation’s core purpose to help create vibrant communities by uniting people and investing resources.

Securing a larger, permanent home is part of the Foundation’s strategy to increase its capacity for a new leg of its mission. The organization has worked to improve the quality of life in coastal South Carolina by connecting donors to the causes they care about. Moving forward, the Foundation aims to deepen the impact by advocating for the long-term changes that can’t be achieved with dollars alone.

To guide this work, the Foundation created a Civic Engagement Agenda last year to identify the most pressing challenges facing the communities in its service area. The top three issues that emerged were: access to economic opportunity, education and affordable places and inclusive spaces.

“We believe our communities thrive when they’re included in economic developments, and when all people are given equal opportunities to share in their success,” said Foundation President and Chief Executive Officer Darrin Goss. “Frank’s gift enables us to affirm our commitment to that mission in North Charleston and all the areas we serve. We are incredibly grateful for his generosity.”

Frank and Kristi Haygood own the Rutledge Avenue office property where the Foundation has been based for the past 10 years. When given the opportunity to help the organization find a new home, the Naval Hospital building stood out as an ideal fit, he said.

Originally constructed in the 1940s as part of the Naval Hospital, the 16,000-square-foot building at 1691 Turnbull Ave. served as the Sick Officers’ Quarters during World War II. The two-story building on the National Register of Historic Places was unoccupied for many years after the Charleston Naval Base closed in 1996. It was recently restored and converted to an office space by the seller, Coleman-Snow Consultants, LLC.

The new office in North Charleston is a centralized location for the Foundation’s service area. About a quarter of the building will be used as tenant space, and the Foundation hopes it will be occupied by an organization with a compatible mission. In addition, a second-floor area will function as a community gathering space for civic leaders, residents, nonprofits and others to exchange ideas and work on issues.

The Foundation aims to relocate from its office at 635 Rutledge Ave. on the Upper Peninsula by the end of the summer. NAI Charleston Broker/Partner Dexter Rumsey facilitated the $2.7 million sale.

Coastal Community Foundation is a nonprofit organization that works with individuals, families and organizations to make a lasting impact on coastal communities in South Carolina through permanent, endowed funds for charitable giving. The Foundation was established in 1974 by members of the Rotary Club of Charleston with a $9,000 grant. Today, the Foundation administers more than 700 charitable funds, manages more than $280 million in assets, and awards about $13 million in grants annually. Its service area includes Beaufort, Berkeley, Charleston, Colleton, Dorchester, Georgetown, Hampton, Horry and Jasper counties. To learn more, visit coastalcommunityfoundation.org or call (843) 723-3635.