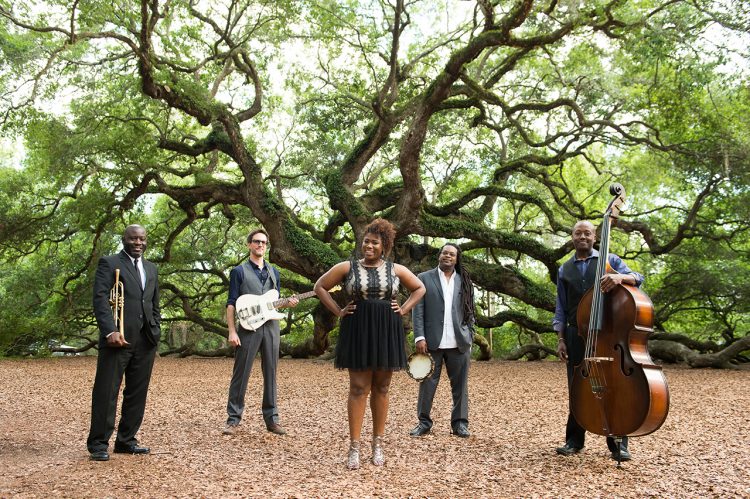 Three College of Charleston alumni are in the running for a Grammy nomination with their band Ranky Tanky.

Started by alumnus Clay Ross ’98, Ranky Tanky, which is a Gullah term loosely translated as “work it” or “get funky,” takes a modern approach to the traditional sounds of Gullah music. Rooted in the cultural traditions passed down from West African slaves in the sea islands of South Carolina, Georgia and North Carolina, Gullah culture encompasses a rich African-American heritage expressed through arts, crafts, cuisine and the creole influenced language of Gullah.

Ranky Tanky features a quintet of musicians including Ross on vocals and guitar, Quentin Baxter ’98 on drums, Kevin Hamilton ’95 on bass, Charlton Singleton on trumpet and vocals, and Quiana Parler on vocals. Ross, Baxter and Hamilton all majored in music at the College. Baxter also previously worked as adjunct faculty at CofC, teaching jazz percussion.

The success of the band is something Ross has credited to the close friendships the group shares. They’ve all known each other for more than 20 years.

“It feels very special,” he said in a 2017 interview with The College Today. “I think that we are very lucky to have met one another when we were young, and to have maintained our friendships over the years, and that now, having realized significant accomplishments individually, that together we are uniquely qualified to represent the roots music of our home for international audiences. I think the combination of our natural chemistry and talents as musicians, in service of this timeless and important music from our home, makes this project something truly special.”