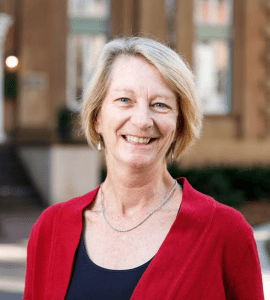 You might call Laura Lageman a trailblazer. Or, perhaps a pioneer. Whatever label you apply, it’s certain that she’ll demur. Throughout her 30-plus-year career in the College of Charleston’s Athletics Department, Lageman has characteristically avoided the limelight. Working behind the scenes is more her style. And in that work, she’s played a pivotal part in developing a long line of superb student-athletes and over a dozen top-tier sports programs.

Lageman is retiring this month as the College’s senior associate athletics director and senior woman administrator in athletics. She came to the College in 1989 as the head coach of the women’s volleyball team, but quickly graduated to a number of additional roles.

“It was kind of an opportune time,” she recalls. “I came from St. Mary’s College, which was much smaller and a Division III school. I was quite fortunate to have this opportunity because the College was just beginning to grow its athletics programs. It had recently initiated the two-year transition to Division I and a lot of changes were in the offing. The institution was adding athletic scholarships and it was beginning life in a new conference (the Trans America Athletic Conference), so it was a dynamic time and it meant a big step up in my career.”

Collectively, these roles seem a perfect fit for someone who has been thoroughly invested in sports her entire life. Her father played college football and her mother was a P.E. teacher, so it was natural that Lageman gravitated to sports. As a high schooler, she was an all-season athlete, competing in volleyball, basketball and even swimming. Because her school didn’t have a girls tennis team, Lageman played as member of the boys team.

“Those were very different days,” she explains. “Title IX was just getting established. I graduated from high school in 1978, which was pretty much the start of opportunities for women to participate in sports. I wasn’t a super athlete, but I really enjoyed it and I was very competitive.”

Lageman went on to play volleyball at the collegiate level, competing for the State University of New York at Oswego and SUNY College at Buffalo. She later completed a master’s degree in sports management at the University of Florida.

As she wraps up her time at the College, Lageman has had a number of opportunities to look back over the span of her career.

“You know, word gets around, so people stop by your office to reminisce,” she says. “That’s nice because there are several people in our department who’ve been here for a couple of decades, so we share stories and talk about memorable times.

“I came on board when President Lightsey was running the College,” she continues. “So, I’ve been here for six different administrations. If you look at the high points of my time as a coach, well, that would definitely include when our women’s volleyball team beat the University of South Carolina in 1993. We had just become part of Division I sports two years before, so it was a big achievement. We showed that we could compete at the top level, maybe not every day, but certainly that day. I was really proud of that moment. I think it meant that our program had arrived, and by extension, the College had too.”

But when asked about the highlights of her administrative career, Lageman pauses. In characteristic fashion, she throws the spotlight on others.

“A lot of the highlights I recall are just seeing our student-athletes grow and mature,” she says. “You watch them arrive as freshmen and witness their careers evolve, and then all too quickly you’re watching them walk across the Cistern at graduation. Maybe you get invited to one or two of their weddings. Those are the highlights. We all witness these individuals progress on the court or on the field, but for me, it’s been special to see them grow as people and watch them mature and observe how they manage the academic component of their lives. That’s been wonderful.”

Lageman is particularly proud of the more than 20 back-to-back semesters that student-athletes at the College have posted an average GPA above 3.0. In addition, she takes pride in the growth that’s happened over the years within the Athletics Department.

“When I came to the College, I arrived six weeks before Hurricane Hugo. That was a crazy time. We were enrolling about 5,500 students and about 200 student-athletes,” she says. “Since that time, we’ve been with three different athletic conferences, growing each time, and we’ve added a number of sports. We added baseball my first year here, and later softball, women’s soccer, track and field and women’s beach volleyball. We now have over 350 student-athletes competing, but we’ve also grown in terms of success. Initially, it was an exception when our women’s golf team or volleyball team made it to their respective NCAA tournaments, but now that kind of performance is expected of our teams.”

Lageman says she’s also proud of the people she’s worked with – both colleagues and students – who’ve gone on to excel and make an impact in their own careers.

“A former business manager who I mentored moved on to become an associate athletic director at Wake Forest University,” she says. “And another former colleague has gone on to an important role in athletics at the University of Louisville. Those are some of the things that I’m most proud of.”

Having a positive impact on the lives of others is what Lageman considers a genuine highlight of her career. And that has sometimes happened even without her knowing it.

“I’ve had student-athletes come back to me later on in life and tell me how formative their time at the College was,” she says. “That’s the stuff that really keeps you going when you learn you’ve helped someone in a positive way. Just building those connections with student-athletes during their years at the College and helping them to make good decisions, those are the real rewards.”

As she steps away from professional life, Lageman intends to remain active locally.

“I want to volunteer,” she says, “and I’ll probably end up doing something with education and local schools. I still have good energy, so I may do something in athletics or sports on a part-time basis. And, whenever COVID subsides, I’d like to get back to traveling. Not a lot of people know this, but I’ve traveled extensively, most recently in South America and earlier in Europe and Southeast Asia. I love foreign travel. I really find it fascinating.”

During the days to come, Lageman says she’ll remember her time at the College – nearly 32 years – with a single word – gratitude.

“I want to say that the College, and the Department of Athletics in particular, has been a fantastic place to work,” she says. “It has given me so many opportunities to grow throughout my career, and I’m grateful. I’ve had the perfect career.”