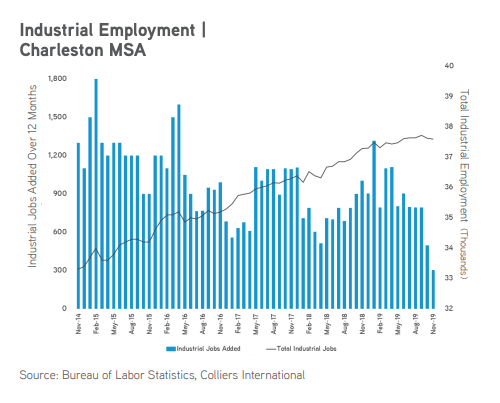 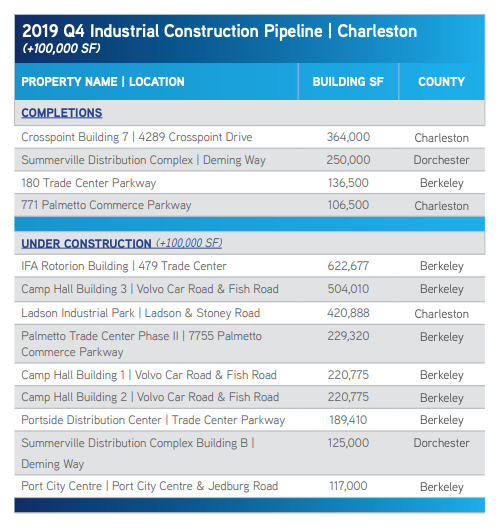 Flex/R&D space is defined as industrial space where more than 30% of the building is utilized for office space. The Charleston flex/ R&D market is comprised of approximately 4.40 million square feet. One 10,783-square-foot flex building was delivered to the Charleston market and is located at 2467 Charleston Highway. Also, one 17,500-square-foot flex building is currently proposed to be built within the Clements Ferry submarket. The flex/R&D sector posted a negative absorption of 40,972 square feet this quarter largely due to 32,000 square feet becoming available at 5809 North Rhett Avenue and Arcadia located at 420 Wando Park Boulevard posting negative absorption totaling 43,027 square feet. Due to the negative absorption, the vacancy rate increased from 4.32% during the third quarter of 2019 to 5.73% during the fourth quarter of 2019. The average triple net weighted rental rate was $9.60 per square foot this quarter.

There have been $250.08 million of new capital investments within the Charleston industrial market during 2019. The capital investments produced 1,756 jobs, with the types of investors including brewing and distilleries of craft beers, general and medical manufacturing, information technology and logistics. Also, according to the Federal Reserve data through November of 2019, there have been 2,300 jobs added in the Charleston metropolitan statistical area, 303 of which were industrial jobs- 65.28% of those were manufacturing jobs. Overall non-farm employment totals 371.800 and while the total number of jobs have decreased over the past eight months, the employment rate is still strong at 98.2%.

There were 12 Charleston industrial sales reported by CoStar during the fourth quarter of 2019, including a $73 million, 14-property portfolio including a 1.1 million-square-foot Summerville industrial building located at 400 Trade Zone Boulevard. Leasing activity increased from the third quarter to the fourth quarter. According to CoStar, there were 23 industrial leases executed this quarter, eight of which were over 50,000 square feet and two of those leases were at 4289 Crosspoint Drive in Ladson.

The South Carolina industrial markets will benefit from the recently negotiated U.S.-China Trade Deal. The two most pertinent aspects of the deal affecting South Carolina industrial markets promote increased purchases of American products and tariff relief on Chinese products. These changes will lead to an increase in imports and exports and the Port of Charleston is already performing exceedingly well, reporting record-breaking numbers in 2019.

Thus, the Charleston industrial market is primed for continued expansion and positive activity into the next few quarters. Capital investments in the areas of manufacturing and logistics are enhancing industrial opportunities and continually attracting interest from outside of the market. Despite the flex/R&D sector posting negative absorption and rising vacancy rates over the past few quarters, the warehouse and manufacturing sectors are expected to have positive growth throughout the Charleston submarkets. There is an immense industrial pipeline expecting many 2020 deliveries – they are predicted to be absorbed relatively quickly due to high demand and an ongoing influx of new industrial businesses to the market. Due to the high-quality new construction deliveries, the average weighted rental rates for warehouse and manufacturing spaces will rise in the next few quarters until all of the new industrial space is absorbed.