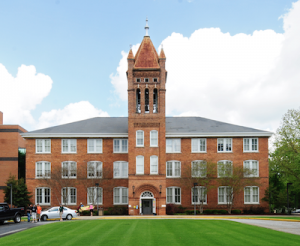 CommUniversity, an opportunity for Lander University students to learn more about what Lander and the community have to offer, was back last week, after a one-year hiatus caused by the pandemic.

“The event was successful,” according to Emily Weeks, associate director of Student Life, with representatives from around 30 area businesses and churches in attendance. 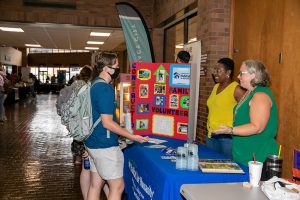 Jilisa Cade, community impact manager with United Way of the Lakelands, was one of the participants. She said she had been educating students on the ways in which United Way assists the community, and “letting students know we offer internships and volunteer opportunities as well.”

Toya Wright, program coordinator for Habitat for Humanity, was also on the hunt for volunteers.

“We’re here to recruit volunteers for our ReStore and our construction site,” she said.

Cornerstone, the local commission on drug and alcohol abuse, also took part in the event. Cornerstone Prevention Specialist Betsy Royal said she had been talking with students about ways of destressing, and also Cornerstone’s helpline, which allows students to speak with a counselor “24 hours a day, seven days a week.”

Stephen Harrington, general manager with Sports Break, said he was looking for “waitresses, hostesses, dishwashers and cooks.” He said that he had been a participant in CommUniversity “since it started,” and that he generally hired “one or two students every year.”

By having an exhibit, Neighbors United Federal Credit Union hoped to “get some more savings accounts opened up,” explain the benefits of having a line of credit, “and help students to understand financial responsibility,” according to Mortgage Loan Officer Alex Clayton.

The Greenwood County Democratic Party was also on hand.

“We’re here to help students learn a bit about civic engagement, give them the opportunity to register to vote, and let them know that there is a role for all college students to play in the political process,” said GCDP Chairman Bill Kimler.