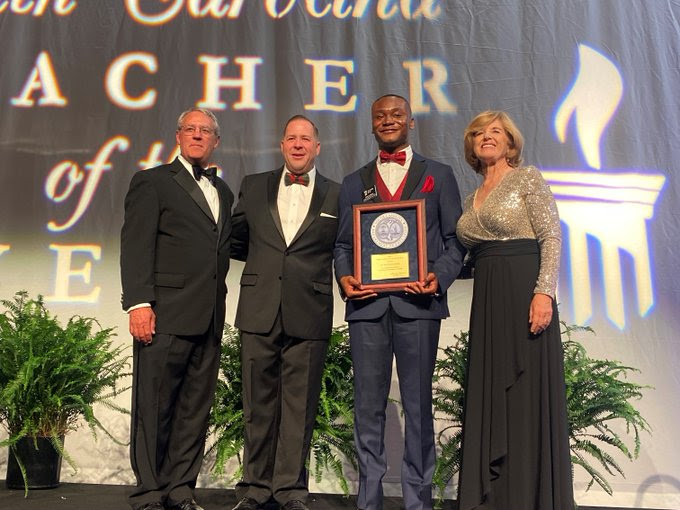 “Deion exhibits the qualities and characteristics that we want to see in every current and future South Carolina educator,” said Spearman. “He is so deserving of this tremendous honor, and I know he will do a fantastic job advocating and representing our over 55,000 teachers this next year.”

Jamison became interested in teaching as a child, but the career choice was solidified after recognizing the disparities in education in South Carolina between districts. As a Bill & Melinda Gates Millennium Scholar and product of Orangeburg County Schools, he ascribes to the proverb “to whom much is given, much is required,” further influencing his decision to teach.

Jamison believes that education is liberation and teaches his students skills such as collaboration, critical thinking, and problem solving to address the world’s most pressing issues.

His work has been recognized nationally through the National Council of Teachers of English and Teach for America as an Early Career Educator of Color Leadership Award recipient. He is also the recipient of the Sue Lehmann Excellence in Teacher Leadership Award. Aside from accolades, Jamison is most proud of creating brave, inclusive spaces for culturally and linguistically diverse students to thrive and sharing those practices with colleagues within his school, the state, and nation to promote equity in education.

As part of the state Teacher of the Year awards program, Deion will receive $25,000 and a brand-new BMW for one year.

Considered one of the country’s strongest, the South Carolina Teacher of the Year program celebrates excellence and strengthens the teaching force by honoring and recognizing exceptional teachers on a district, state, and national level. These awards not only assist in retention efforts but serve as a powerful recruitment tool.

The South Carolina Teacher of the Year serves for one school year as a roving ambassador providing mentoring, attending speaking engagements, working with teacher cadets and teaching fellows, leading the State Teacher Forum, and serving as the state spokesperson for over 55,000 educators. Learn more about the Teacher of the Year program.