March 13, 2020 seems an eternity ago. That day my niece, Benton, got an unwelcome big 4-O birthday gift—a national emergency courtesy of COVID-19. “How lucky am I,” she said. Well, this was no ordinary black cat Friday.

As time wears on masks turn vogue. People post photos of their dogs wearing masks. Men tie bandanas around their face. I even saw a statue of a whitetail deer wearing a blue mask. Meanwhile supermarkets look as if famine rages. Meats and paper products? Gone.

Hair lengthens. Gas prices fall. People shelter at home. Not me. Outfitted with camera, a full tank, water, and food, I social distanced at 50 MPH along back roads that lead to rustic beauty. My first stop? A seemingly unstoppable green and lush plant.

Forests vanished into that leafy green sea some call a plant cancer. Shutting out sunlight, kudzu starves trees to death. It blankets utility poles, fences, yards, houses, trucks—anything in its path. Kudzu has done what armadillos, hydrilla, coyotes, and many northern folks failed to do: become a Southern icon.

A Yankee asked a southern farmer how to grow kudzu. The farmer tells the Yankee to throw kudzu seeds on the ground, then run like there’s no tomorrow. Well, there is a tomorrow for kudzu. The invasive Asian plant is here to stay, climbing, curling, and coiling around everything in its path. Kudzu, say experts, is more a myth than anything. You be the judge. 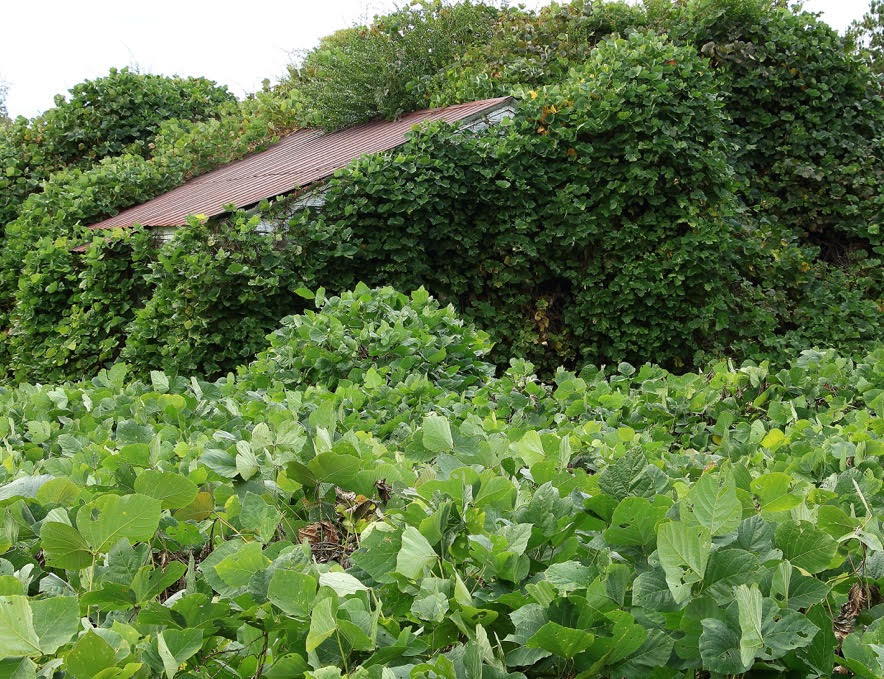 I asked two South Carolina writer-adventurers a question. “What’s the most remote place in South Carolina?” Off I went to Sandy Island, sitting between the Waccamaw and Pee Dee Rivers. A boatman took me across the Waccamaw. The 19-square-mile island consists of huge prehistoric sand dunes. I toured sandy lanes; saw deer, wild hogs, and longleaf pines. Saw too a way of living mainlanders can only guess at. The island didn’t get electricity until 1965. Gullah, maybe 100, live there, descendants of rice field workers.

You won’t see traffic lights or asphalt. Life on a remote island is peaceful. “No commotion,” as one resident said, but it’s arduous. Islanders must go to the mainland and fill jerrycans with gas and haul them back and then fill their vehicles. Children take the school bus boat across the Waccamaw River to catch a traditional bus. Their parents and others motorboat to the mainland. Then they make it to their place of work via rides or their own vehicles.

Island residents barge vehicles over to the island, a costly undertaking. When a car or truck dies it’s abandoned. You’ll see abandoned appliances for the same reason.

Myrtle Beach is not far away but when it comes to years, it’s far in the future for Sandy Island, founded by a freed slave who had worked in the island’s rice fields is lost in time. 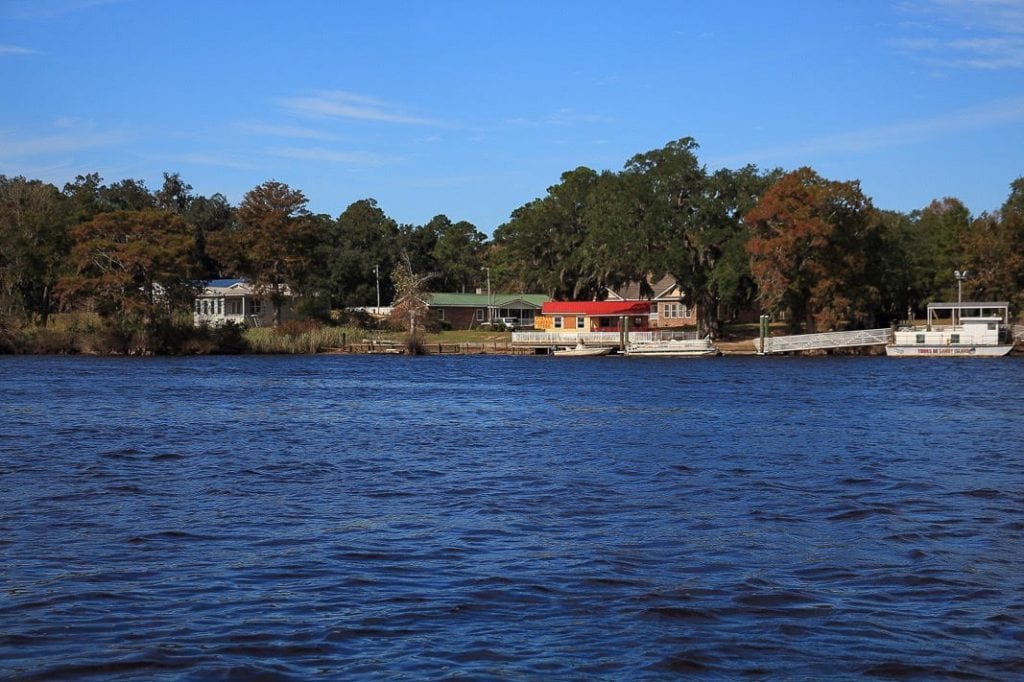 From springs and steams near Cashiers, North Carolina, a mighty river forms near Whitesides Mountain. The Chattooga flows 10 miles in North Carolina before forming a forty-mile border between Georgia and South Carolina. The river drops 2,469 feet over 50 miles (49.3 feet per mile), creating a wild, dangerous run. The river surges, pools, and slashes through Chattooga Country as National Geographic referred to it. It’s known too as “Deliverance Country” owing to the 1972 film, Deliverance.

This savage-and-stunning river flows through ancient Cherokee lands. Dams straddle most rivers in the Southeast, but not the Chattooga. Fishermen, naturalists, novelists, environmentalists, essayists, filmmakers, and the curious come to the Chattooga. The river has long attracted thrill seekers, many times fatally. One summer an ill-fated deer ended up in a keeper hydraulic where it tumbled for a week before the river spat it out, piece by piece. Best to employ an outfitter to take you down river.

“Sheltering Along The Back Roads doesn’t end here. Like the Chattooga it keeps on rolling. Don’t be surprised when you hear from me again somewhere down a back road where the air is fresh, sunlight warm, and solitude is mine. I’ll cruise mask-less through a land of nature, beauty, and places yet to be spoiled. 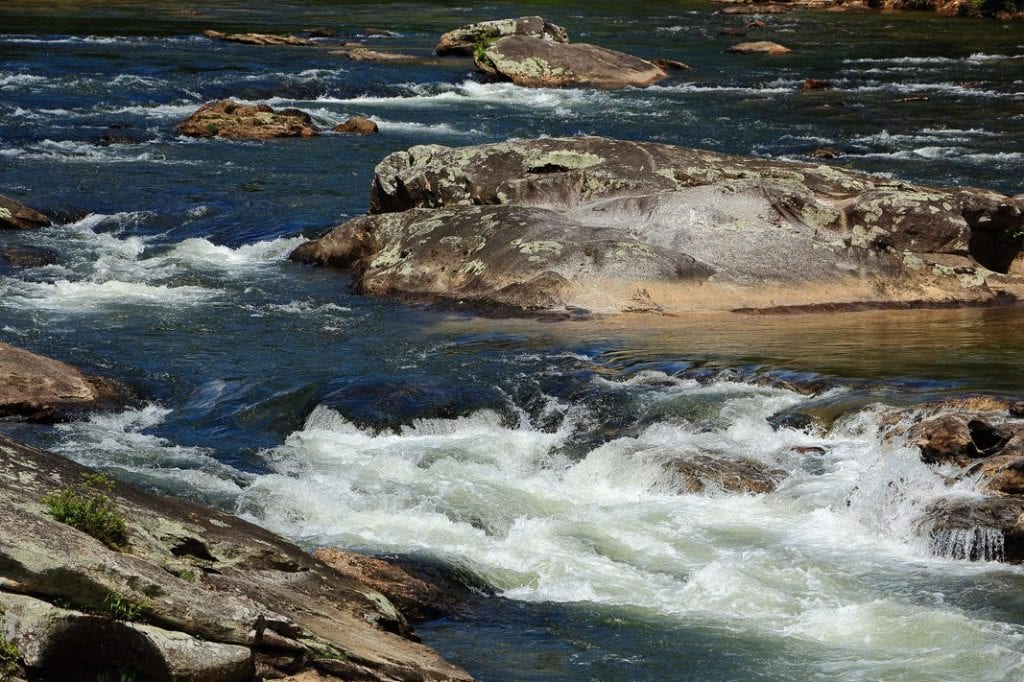 Approaching Bull Sluice on the Chattooga