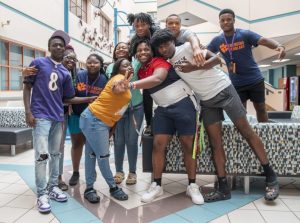 Emerging Scholars, one of Clemson University’s most impactful outreach programs, is celebrating its 20th anniversary Saturday. Since its founding in 2002, Emerging Scholars has become a flagship program for Clemson as it fulfills its land-grant mission of serving the underserved in South Carolina.

The mission of this innovative program is to establish a desire to attend college among students in families from the state’s rural areas on the I-95 corridor. It operates in seven South Carolina high schools: Allendale-Fairfax, Bamberg-Ehrhardt, Denmark-Olar, Wade Hampton (Varnville), Estill, Dillon and Marlboro County.

The program brings cohorts of students to campus each summer to experience a university atmosphere while attending workshops focusing on academic enrichment, developing leadership skills and increasing college preparedness.

The results are impressive: 100 percent of the Emerging Scholars students (more than 1,000) have graduated from high school, with 82 percent going on to attend college. That more than doubles the overall college enrollment rate for 18- to 24-year-olds, which is 40 percent. That is  without taking into account Emerging Scholars participants come from underserved communities.

Amber Lange, the assistant vice president of Educational Access and Engagement and executive director of College Preparation and Outreach, has been involved with the program since its first year when she was a graduate student.

“There are two things that I’m really proud of when it comes to the time that I’ve been working with Emerging Scholars,” said Lange. “The first is the relationships we’ve built in the communities. After 20 years of working in these rural areas, we know a lot of families and a lot of community members. I’m so thankful for them and that they trust us with their children  and that they give us a chance to show their students what they’re capable of.”

Lange said the second thing she’s most proud of are the scholarships created for students who complete the Emerging Scholars program. Today, every Emerging Scholars graduate who is admitted and attends Clemson gets a full scholarship. (The first cohort of 13 scholarship recipients have all graduated.) There are also several scholarship funds students can apply for if they do not attend Clemson.

“At the beginning, we were working with students, and we didn’t have a lot of money to offer them to come to Clemson. So that has really changed the program and what we do. I really think that’s a huge accomplishment,” said Lange. “I’m definitely thankful for all the support we get from Clemson, but we get a ton of support from people who are not here at Clemson, and that might be a student who has given us $25 or a Board of Trustees member who has given a million.”

The program was created by U.S. Navy (Ret.) Capt. Byron Wiley, who approached then-president of Clemson Jim Barker with the idea in 2001. Wiley had a distinguished 30-year career as a U.S. Naval Flight Officer and was designated a “proven specialist” in human resource management and military intelligence. He spent time in service in England’s Royal Navy as part of the Military Personnel Exchange Program and was the first African American in the history of the U.S. Navy to serve as the personal aide to an admiral.

Wiley came to South Carolina after retiring from the Navy and immediately recognized the inequities in state’s education system. He devised the concept of the program to address the inequities he witnessed firsthand as a boy in Arkansas. With the support of President Barker, he used office funds to bring the first group of students to Clemson in the summer of 2002.

Lange gets emotional when she speaks of Wiley, who she knew and worked with during the program’s early years.

“This is really his legacy,” she said. “He is the reason I’m sitting here and the reason we’re having this 20th year celebration. It was his vision. Like me, he’s not from South Carolina, but that didn’t matter to him. He just really wanted to make a difference and saw a need. And he was someone who, when they see a need, they try to fill it.”

Program staff work with high school guidance counselors to identify freshmen who might be the first generation in their families to attend college and those students they believe will need extra motivation to get there. These students come to Clemson each summer for one- to three-week residential sessions and take classes in English, math, science, African-American history, public speaking and computer science. Students also attend academic workshops and visit at least 14 colleges while in the program.

“It’s so amazing that we have been doing this for 20 years!” said program director Sara Hanks, who took over as director in 2021 after working with the program for five years. “The program has had an amazing impact on the students and communities we serve. We just had 80 students on campus for their first experience with us and I look forward to the program being able to continue that for the next 20 years.”