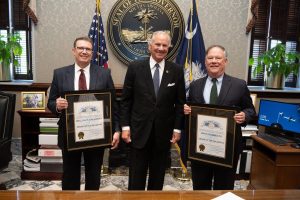 As Executive Director for 18 years, William Calloway led the museum through major initiatives, including the Windows to New Worlds expansion which transformed the State Museum into a 21st Century institution. Under his leadership the museum welcomed nearly 1 million visitors, as well as students from all 46 counties in the state. An active member of the community, Calloway currently serves on the board of EdVenture Children’s Museum and is a member of the Midlands Business Leaders Group.

Originally appointed by Governor Jim Hodges, Gray T. Culbreath has served the Museum Commission under 4 governors and 3 executive directors in his 22 years of service. For 19 years he served as Commission Chair and his leadership was invaluable in guiding the museum through the $23 million dollar Windows to New Worlds project. Culbreath is a partner at Gallivan White & Boyd, P.A. and, for over 30 years he has handled complex trials and appeals in federal and state courts across South Carolina.

About the South Carolina State Museum

As the state’s largest and most comprehensive museum, the South Carolina State Museum offers a unique entertaining and educational experience to visitors throughout its 225,000 square foot facility located in the heart of downtown Columbia’s Congaree Vista. The State Museum is housed in one of its largest artifacts, an 1894 former textile mill listed on the National Registrar of Historic Places. In addition to beautiful meeting spaces throughout the facility, guests can explore outer space in one of the largest planetariums in the Southeast, watch an interactive 4D movie and look through a vintage telescope in a one-of-a-kind observatory. These exciting opportunities are all in addition to the four floors of South Carolina art, cultural history, natural history and science/technology. Visit scmuseum.org to learn more.