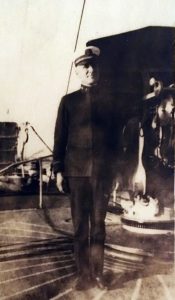 J.H. Minnis just missed out on the action of the First World War. But when you join the U.S. Navy, you get to “see the world.” And for his part, Minnis got to see more of it than he would ever have seen otherwise.

He left behind a memoir of his adventures. And to his granddaughter, a history professor, that account is the gateway not only to some exciting places, but to centuries of exciting times and events.

At 12:30 p.m. on Friday, June 26, historian Joyce Wood will share insights into her grandfather’s memoir in a program titled “Discoveries from World War I Memoir: Exploring the Haunts of Pirates.” The lecture, part of the South Carolina Confederate Relic Room and Military Museum’s monthly Lunch and Learn series, will be presented live on Zoom, rather than at the museum itself.

Although the museum is now open again, it is still following procedures to prevent the spread of the coronavirus, and that includes presenting live programs that might normally draw a crowd via the Web. Visit relicroomsc.com or check the museum’s Facebook page for details on how to participate.

Pirates, you may ask? What does that have to do with the Great War? Dr. Wood will explain, demonstrating what she hopes to develop as a method of using primary historical sources to engage the interest of young people.

Her primary source in this case is her grandfather’s memoir.

J.H. Minnis was an orphan who grew up on a turpentine plantation in South Carolina’s Lowcountry after another family took him in following the loss of his parents. As a young man, he became a merchant in Charleston. He knew nothing of the sea.

The U.S. Navy was rapidly expanding in 1917, and needed men to fill the new ships it was building. Navy representatives were going around the country speaking to local merchant associations, looking for civilians with leadership potential who wanted to become officers.

Minnis signed up, and was sent to the Naval Academy in Annapolis for six months of training.
He became a lieutenant junior grade, and would serve in that capacity for more than two years.
He thought he was going over to fight the Germans. But as it turned out, “This poor guy, the main thing he fought was seasickness,” says Dr. Wood.

He spent time in the San Francisco area, quartered aboard an old sailing ship called the Intrepid while he waited for a brand-new destroyer to be ready. Eventually, USS Schley was launched, and it arrived in New York, poised to cross the Atlantic, on Nov. 10, 1918. Of course, the very next day, the war ended.

Schley headed for Europe anyway, and was there when the Peace Conference was going on in Paris. Sometimes it transported dignitaries headed to that historic event. But mostly, it sailed around the Mediterranean, visiting Gibraltar, Brindisi, Tangiers, Algiers and Constantinople.

That’s where the pirates come in. Various points in North Africa visited by Minnis and his shipmates were the very ports from which the Barbary Pirates had operated a century earlier. That’s where the U.S. Navy and Marine Corps scored some of their most storied early victories, on and near “the shores of Tripoli.”

Not only that, but remember that ship Minnis had lived on back in the States? USS Intrepid played a key role in the First Barbary War back in 1804. Not the same one. The first Intrepid fought the pirates. Minnis lived on the third of four American warships that would bear that name. But Dr. Wood uses the coincidence as another way to show how all of history is connected to the things, events and places that surround us in our present-bound lives.

Dr. Wood was educated at Winthrop University and the University of South Carolina, where she received her Ph.D. After teaching history and social studies at the secondary level, she accepted a faculty position at what is now Anderson University. From 2006 to 2014 she served as chair of the history department. Since officially retiring in 2016, she has done some adjunct teaching, and continues to research and write.