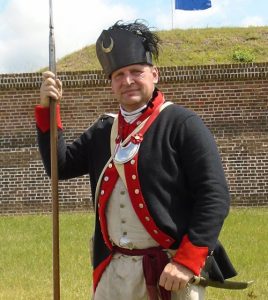 What was it like to participate in the Siege of Savannah, one of the bloodiest battles of the American Revolutionary War, and a disastrous failure for the Continental Army and its French allies?

That’s what Erick Nason will endeavor to convey at noon on Friday, Jan. 31, at the South Carolina Confederate Relic Room and Military Museum in Columbia. Nason, a modern-day career soldier and experienced Revolutionary War re-enactor, will appear in uniform as a character he has created who is a composite of officers who actually participated in the battle.

The title of the lecture, which is free and open to the public, will be “Captain Clarke recalls the Siege of Savannah.”

In 1778, the British effort to suppress rebellion had reached a stalemate in the Northern colonies, so the redcoats turned south, where they hoped to be more successful with the help of Southern loyalists. Having failed earlier in the war to take Charleston, in December 1778 they overcame ineffective militia and Continental troops to take Savannah. Within weeks, they controlled all of Georgia.

Six months later, regrouped Continental and militia forces under Patriot Gen. Benjamin Lincoln set out from Charleston to retake Savannah, with help from the French forces who had entered the war on the American side in the previous year.

Things looked promising at the outset of the operation. The French were in place early, and initially were confident enough to demand the surrender of the British troops under General Augustine Prevost. The French commander, Charles Henri Hector d’Estaing, was relying on Lincoln’s force to stop British reinforcements – about 900 troops under Colonel John Maitland – from coming from Beaufort to Prevost’s aid.

But communications failures resulted in Maitland getting through. Worse, the plan of attack was betrayed to Prevost by a deserter from the Franco-American side. The French troops’ fifes and drums also had a negative effect on the element of surprise.

“We got butchered,” says Erick Nason. Among the many killed was Polish nobleman Casimir Pulaski, who has been described as the Father of the American Cavalry. A street in downtown Columbia is named for him.

That describes the situation from a general’s point of view, but on Jan. 31, Nason will relay what it was like from the company-commander level, telling the tale from the perspective of “Captain Clarke,” a character in a series of books Nason is writing.

Erick Nason served in the U.S. Army for 20 years, with the 2nd Ranger Battalion and the 10th Special Forces Group. While in the service, he received a Bachelor of Arts degree in world military history and a master’s degree in military studies, concentrating on the American Revolution, both from the American Military University. He later earned a doctorate in education from Walden University. He retired from the Army in 2005.

He works for Alion Incorporated as a personnel recovery support manager for U.S. Air Forces Central Command. As a hobby, he has been a living historian and reenactor since 1987. He has written and published his autobiography, as well as two books featuring the character of Ranger Jacob Clarke. He lives with his wife and daughter in Sumter, S.C.