1990. Summer School, a place nobody ever wants to be. One of my first teaching assignments, and nothing from my education classes applied. The students fell into two groups: the poor and the partiers. The poor kids came in exhausted from working two or three jobs or taking care of siblings. The partiers came in hung over or still drunk from the night before. Forget methods and pedagogy. I had to keep these kids awake.

There was little administrative guidance, so I decided to wing it. Unit one combined expository writing with public speaking. One of my party girls explained how to pick up a man in five minutes or less without getting “nekkid.” Weird Ricky* walked in with a Boa Constrictor wrapped around his neck and fed it little white mice while sharing how to take care of a pet snake. Sweet Kimberly,* who was not very bright, brought in her grandfather’s ice cream churn and rock salt and taught us how to make home-made ice cream. No teacher-of-the-year awards coming my way, but we were getting by best we could.

Unit Two. The kids were supposed to read a dreadful play from the textbook. USC was putting on “Driving Miss Daisy” so I put together a plan. The principal gave me an obstacle he didn’t think I would overcome: if I could find a district employee willing to transport and chaperone, I had his permission. I went straight to the young, single football coach who was more than happy to help. In 1990, teachers could give students rides in their personal vehicles, so the coach and I loaded the students who showed up and drove downtown. We had a mix of boys and girls, all white except for one, Antonio Carter.* 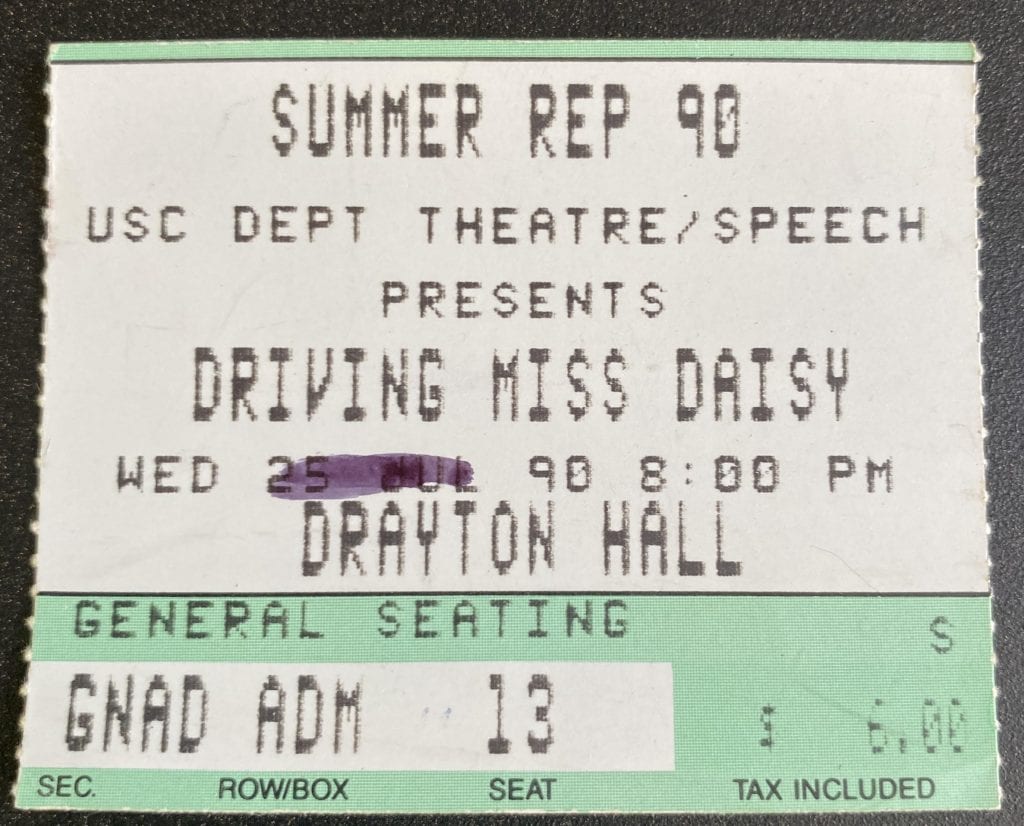 As we waited for the show, Antonio* pointed out that he was the only black person in the auditorium. We all started looking around. Surely, that wasn’t right. Sweet Kimberly got excited when she spotted the black janitor. Not helpful.

Antonio wanted to leave. I told him it didn’t matter that he was the only black person. He asked me how I would feel if I were the only white person? I was about to go sit with him in the lobby when the football coach handed me a program and tapped on the name of the leading actor playing the role of Hoke Colburn, Miss Daisy’s chauffeur.

Attending the play allowed me to check off another item from ninth-grade curriculum for the students, and I learned my own lessons that night. Experiences are better than text books, and football coaches might be smarter than you think. More importantly, I got insight into what it feels like to be in a crowd where nobody else looks like you.

White people did not intentionally keep black people out of that theatre. Nobody meant to make Antonio feel uncomfortable. But that boy’s reality was different than mine and different from his peers.

Three black men: my student, a janitor, and the star of the show. Three men out of several hundred. How must it feel to sit in an auditorium where, initially, the only other person who looks like you is the janitor? How must it feel to be a black actor performing for an all-white audience? I’ll never know about those things, but here’s what I do know. On that hot summer night back in 1990, there was no anger, no judgement, no blame. But we all learned to see a situation from someone else’s perspective. I’m thankful we had that lesson.

*Editor’s note: Names changed to protect the identity of the students.

Tammy Davis is a teacher and a writer finding lessons in everyday life. Order her new book, Back Porch Stories on Amazon or Kindle or at www.tammydavisstories.com