Great Aunt Annie, long buried in some graveyard up Asheville way, told me ghost stories when I was a boy. I’d sit by a hissing wood stove on a bitter night and chills gave me goosebumps, but Old Man Winter wasn’t the culprit. Aunt Annie’s tales were, stories about a dead woman on full-moon nights who walked through split-rail fences and mysterious white apparitions that spooked horses on dirt roads at night. 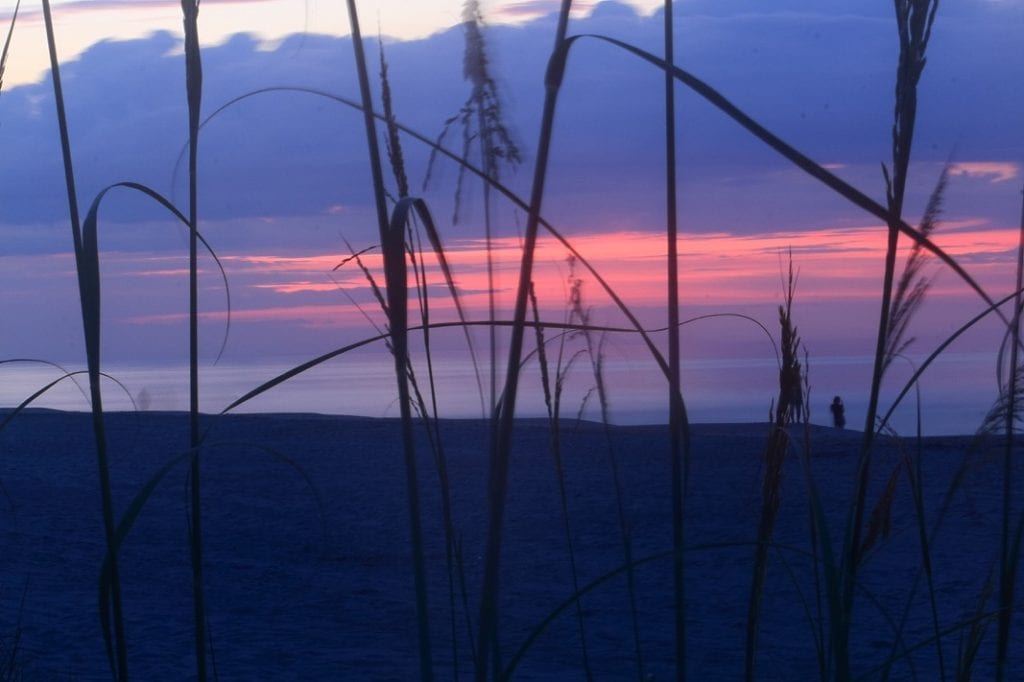 Her stories have long lived in me and I have forever hoped to see something mysterious, and I finally did, although I didn’t realize it. On vacation at the South Carolina coast, I got up to photograph sunrise over the sea. Ghosts were not on my mind. I was half asleep. Translation, no coffee yet. My first shot through sea oats captured pink clouds, the surf, and a woman looking at her cell phone. When I downloaded the image I saw something else. In the bottom left of the frame an airy figure resembled the legendary Gray Man. I enlarged it and could see legs, a torso, and head, gray but translucent. Breakers rolled through the torso.

Now I admit it’s not the sharpest image. Translation, no coffee yet. When other photographers saw my image on social media they gave me advice. “Clean your sensor.” “Wipe the raindrop off your lens.” The lens was new with a long hood and the sensor’s fine. There was no rain. Besides, all the other images that morning were free of “spots.” Had I photographed the legendary Gray Man, a popular ghost tale along the coast near Pawleys Island?

While sipping coffee, I read about him online. Semi-transparent and wearing a coat, the Gray Man’s a good guy, warning people of impending hurricanes. One story goes that the Gray Man was a storm victim himself. On September 27, 1822, a hurricane made landfall near Charleston as the Gray Man rushed home to see loved ones. He had been overseas for two years and especially wanted to see his fiancé so they could plan their wedding. Taking a shortcut, he rode into quicksand and perished. His fiancé, shattered by grief, wandered the shore for hours. Around sunset a shadowy, gray figure approached her, then vanished.

I got another Yeti full of coffee and studied the photo, wondering just what I had captured that morning. The translucent gray figure certainly looked like a man, and that afternoon thunderstorms pounded the beach. If it was the Gray Man, he was right again, albeit no hurricane made landfall.

Did I photograph a ghost? Well, of course not. These days you risk being judged insane if you tell folks you believe in ghosts but my camera caught something. You be the judge. If you, like many folks, love ghost stories, you may believe it’s the Gray Man but if you’re a skeptic who lives in a no nonsense world, you’ll believe an aberration, not an apparition, entered my digital Canon that morning before dawn.

Ghost or not, the photograph gives you something to consider because the eyes, they do not lie.