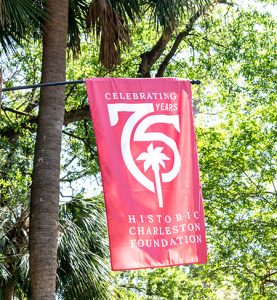 We’re celebrating in style with hundreds of flags around the Charleston’s historic neighborhoods.

In celebration of the Foundation’s 75th anniversary, commemorative flags are going up on historic houses and businesses around the peninsula. Each property with a 75th Anniversary flag is an easement property, covenant property, a partner, or a Foundation friend; a property that has been impacted by the Foundation in some way. On nearly every street you can find a 75thAnniversary flag flying, or hanging from a piazza, starting April 28 and through the month of May which is also Preservation Month. The flag represents the Foundation’s impact, the Foundation’s work and the community that works alongside our staff, every day. With two Historic House Museums, a revolving fund, and significant easement and covenant program, Historic Charleston Foundation’s impact is hard to ignore.

For the next 75 years, the Foundation will continue to strengthen its focus on resilience, sustainability, and affordability, while advocating for common-sense development that reflects our community’s values. 75 years down, and we’re just getting started…

The Foundation is proud to celebrate Charter Day on Thursday, April 28, with an Awards Ceremony at First Baptist Church to honor individuals and groups in the community who have impacted the historic preservation of our community, in some significant way. Followed by a short reception, the Awards Ceremony at 6 pm will grant the following awards:

The Frances R. Edmunds Award – The Edmunds Award for Historic Preservation is Historic Charleston Foundation’s highest honor. Named for our first director, this award is presented only on very special occasions to recognize exceptional personal achievement in the field of historic preservation and service to the principles embodied in the Foundation’s mission. The Foundation will award one special recipient.

Established in 1947, Historic Charleston Foundation (HCF) is a non-profit organization whose mission is to preserve the history, architecture, and culture of Charleston. The Foundation is known for its preservation and advocacy programs including protective covenants and easements; education and outreach; and it is the first organization in the country to establish a revolving fund to acquire and preserve historic buildings, a model now replicated in historic communities across the nation. Preservation coupled with education and outreach is at the heart of the HCF mission. HCF fulfills its educational mission through the interpretation of its collections and two Museum Houses: the Nathaniel Russell House, c. 1808 and the Aiken-Rhett House, c. 1820.