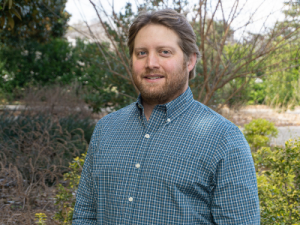 Mearns began his work at HC in 2015 as a horticulturist and was promoted to his current position in 2019. He’s responsible for the maintenance, planting and development of the grounds at all six of Historic Columbia’s properties, as well as maintaining the only publicly accessible online plant database in South Carolina.

“This is a well-deserved recognition for Keith who has worked to institute deep and lasting changes to the landscapes at Historic Columbia,” said Robin Waites, executive director of Historic Columbia. “His vision for the properties goes well-beyond beautification. He uses the sites to build on and highlight the legacies of those who worked these grounds long before him.”

Mearns has long held a deep connection with plants and the natural world. The Columbia native graduated with a bachelor’s degree in anthropology from the University of South Carolina. During his time on campus, he was active in his field, working in UofSC’s Moore Herbarium and assisting Dr. John Nelson for several field botany classes. This experience led to an opportunity at the Riverbanks Botanical Garden, where he served as horticulturist for two years.

Since his arrival at Historic Columbia, Mearns has proved himself as a richly gifted professional whose expert plant knowledge and superior interpersonal skills have led to advancements in the organization’s work to become regionally recognized as a leader in horticultural stewardship and education.

His career highlights at HC already include the following:

Additionally, Mearns is a board member of Slow Food Columbia and has worked with Dr. David Shields to locate and preserve “lost” southern heirloom crops and fruits. He also serves on the board of Columbia Green and appears as a regular guest on SCETV’s Making It Grow.

In November 1961, a small group of individuals intent on saving the Ainsley Hall House from demolition officially incorporated as the Historic Columbia Foundation. Over the next six decades the organization, which was founded on the premise of preservation and education, would take on the stewardship of six historic properties in Richland County. Today, the organization serves as a model for local preservation efforts and interpretation of local history. Visit HistoricColumbia.org or find us on Twitter, Facebook, Instagram or YouTube.