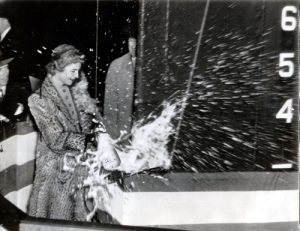 Her name was Jean Adams Paschal. She was in Camden, N.J., on that cold December day to christen the Navy’s newest ship, the light cruiser USS Columbia. She was chosen for that honor because her father was the interim mayor of the city for which the ship was named.

The Columbia, called the “Gem of the Ocean,” would go on to distinguish itself in combat against Japan, serving in several Pacific campaigns. Earlier this year, some of the last surviving members of her crew gathered in Columbia for what may well be their last-ever reunion.

The South Carolina Confederate Relic Room and Military Museum has quite a few artifacts and documents pertaining to the ship, including a five-foot model of the cruiser. But one of the museum’s most interesting Columbia-related artifacts was donated just a few years back, by the former Miss Paschal.

By then known as Jean Shivel, she got in touch with the Relic Room from her home in Virginia after reading in a newspaper about a previous Columbia reunion, in 2009. She wanted to give the museum the original shattered champagne bottle with which she had launched the ship. The pieces were still contained within a mesh covering, adorned with red, white and blue ribbon. The bottle had all been presented to her in a wooden display box complete with a brass plaque naming her as the ship’s “sponsor.”

A Columbia history tells of how Jean made her way through the busy Camden shipyard with her parents that day, wearing a new winter coat and corsage of fresh flowers. She was directed to a ramp supported by scaffolding that took her to “the knife-edged bow” of the new warship.

“She told me in a phone conversation that she did not have a real sense of what she was doing at the time, and was kind of frightened of the bottle breaking,” said Relic Room Director Allen Roberson. “She had to hit it a second time really hard against the steel hull to break it!”

Nervous as she was, though, she “remembered thinking that some of the Columbia sailors in their uniforms were cute, so she didn’t mind being the brief center of attention,” said Roberson.

So it was that a girl from Columbia, South Carolina, helped America take a first step on a long road to victory against Japan. And now the bottle with which she did it is back in Columbia, among the collections of the Relic Room.