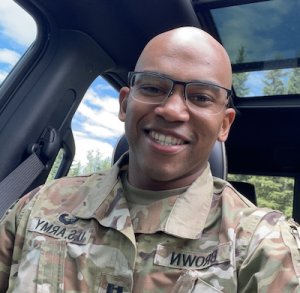 “The soldier is the Army. No army is better than its soldiers. The soldier is also a citizen. In fact, the highest obligation and privilege of citizenship is that of bearing arms for one’s country”- George S. Patton Jr.

Lander University alumnus Marcus Brown is serving his country more than 4,200 miles from where he was born and raised in Camden – and many thousands of miles, too, from where he once was stationed at Fort Jackson in Columbia, S.C.

A graduate of Camden High School, Brown earned a bachelor’s degree in business administration in 2014 from Lander, where he was a member of the Highlander Battalion ROTC program.

He enlisted in the U.S. Army on March 19, 2012, while enrolled at Lander. “I took the 2012-13 school year off to complete basic combat training and advanced individual training,” said Brown. “I originally enlisted in the S.C. National Guard before switching to active duty in 2017.”

Brown said two uncles had served in the military. He decided to join “because I saw all the benefits it (the Army) could offer, along with the opportunity to do something bigger than myself.”

Brown’s desire to serve others was evident before he graduated from Lander. During his college days, Lander friends and staff recognized Brown for his selfless actions and willingness to help others – the type of citizen that Patton himself described.

When he was nominated to be the Samuel Lander Man of the Year award in 2014 – an honor which he received – the nomination recognized Brown for “always willing to put himself before others,” as evidenced by this service with the National Guard and community service with afterschool programs.

The nomination also went further to say that Brown “sacrifices his time by giving a helping hand to the elderly and donating time at the soup kitchen … he isn’t just a great person – he also has a great heart.”

In addition to his volunteerism, Brown was a resident assistant on campus and a member of Phi Beta Sigma Fraternity Inc., an international organization that promotes service.

Brown got to know to Lander when a neighbor was attending a freshman orientation session on campus. “I fell in love with the campus,” Brown said. “Greenwood and the Lander campus gave me an at-home feeling that I could not pass up on.”

He said his favorite memories from Lander were “going to the café/student center between classes and the people I met while there.”

Even today, “I can truly say that the people I met at Lander are definitely family,” he said. “I call Lander ‘the hidden gem’ of colleges in the state of South Carolina.”

Stationed in Fort Wainwright, Alaska, Brown has earned the rank of captain and is a company commander. Fort Wainwright, the “Home of the Artic Warriors,” is located in the central interior area of Alaska. For those less familiar with Alaska’s geography, the city of Fairbanks is located to the west, and the City of North Pole is to the southeast.

Brown, who has been in Alaska for about six months, said, “I have experienced all four seasons in such a short amount of time.”

He and his wife Kayla, a 2015 Lander graduate, are parents to Marcus Jr., 4, and are expecting a daughter, Hazley, who is due in February. At the family’s recent gender reveal celebration, photos were taken with patches of snow in the background – a far different setting that the S.C. couple is accustomed to seeing in the fall.

“Alaska has been an adjustment for my family and me, but at the same time the beauty of the state has been absolutely breathtaking,” he said.

The family has had the opportunity to view the Northern Lights, also known as the Aurora Borealis, at night. “The lights actually appeared to dance in the night sky. On the night we watched, the lights were green, but they also can be pink and blue,” he said.

In addition to working out at the gym, Brown said he enjoys learning something new about Alaska every day. “I love that Alaska is so scenic and peaceful, which is unlike any other place I’ve been,” he said.

He is looking ahead to making the military his long-term career and hopes that he eventually can be stationed back on the East coast. “I havn’t been uprooted. I still have one foot in South Carolina, and one foot in Alaska,” he said.