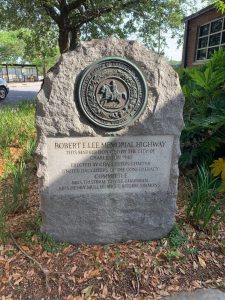 Today, in response to media inquiries, the city released the following backgrounder on the Robert E. Lee Memorial Highway marker:

On July 21, 2020, the city of Charleston received an email from the Charleston School of Math + Science requesting the removal of a “Robert E. Lee Memorial Highway” marker on the school’s property at 1002 King Street.

According to a news account of the time, the marker was erected by the United Daughters of the Confederacy (UDC) and placed on the site by Mayor William Morrison in 1948.

Mindful of the state’s Heritage Act, which limits the authority of local governments with regard to certain removals and renamings, city officials paused any action on the request, and asked the city’s legal department to look into the issue.

After examining the facts and the law carefully, the legal department concluded that removal or relocation of the marker was allowed under the Heritage Act.

In light of CCSD’s repeated entreaties, as well as the legal department’s view that the Heritage Act did not forbid the removal or relocation of the road marker, the city honored the school district’s request by removing the marker and placing it in safe storage on July 20, 2021.

City legal staff is currently in discussions with the local chapter of the UDC to find an appropriate home for the marker.

“The city of Charleston strongly respects the rule of law and recognizes the authority of the Heritage Act,” said city attorney Julia Copeland. “We simply do not believe it applies in this case. And we look forward to reaching an agreement with the UDC that satisfies the concerns of all involved.”