The things we collect. When I am gone my daughters will think their dad was a bit touched. Just why did he hang onto a rusty bolt? And what’s with the rock? The arrowheads they’ll get. Well each object you see here holds memories.

The white disk is a circa 1771 Mason jar lid. Before metal caps came along, folks sealed their jars with a snow-white disk of glass. Not that special you say. Well, I found this Boyd Genuine Mason jar cap in ankle-high water in Petersburg, Georgia, the drowned ghost town that almost became the capital of Georgia. 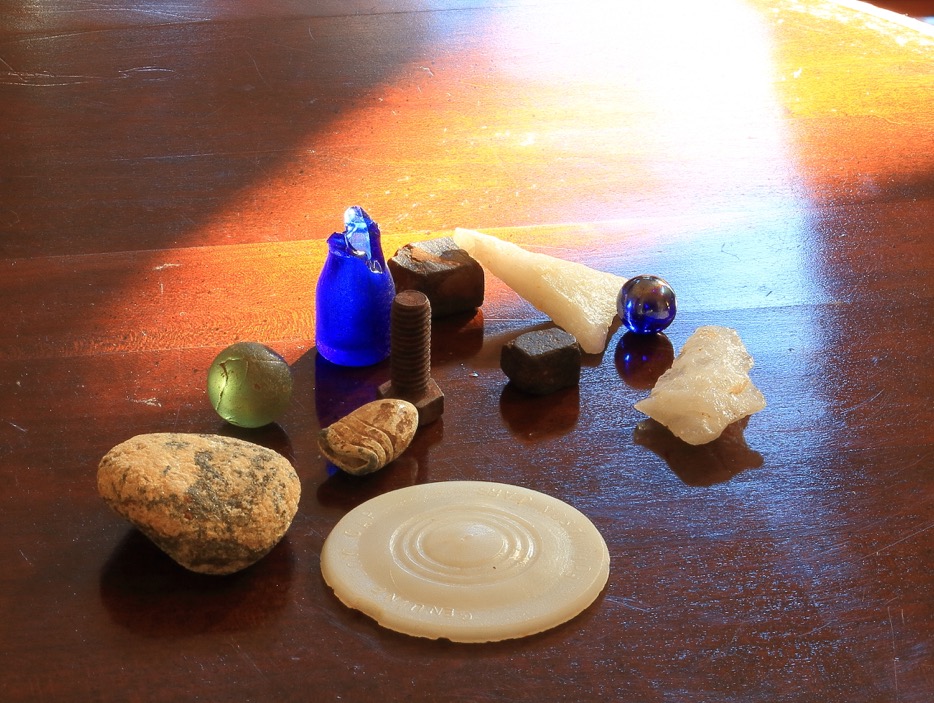 That smooth, gray-and-white rock left of the cap? I picked it up from the swift waters of the Chattooga River, a place special to me in many ways. If I hold that rock up to my ear I can hear the Chattooga raging. Well, I pretend I do. Just behind that rock is a green marble, Coca Cola green. I heard that Coca Cola bottles were made from such marbles but I’ve yet to confirm that. What makes more sense is that they made early Coca Cola bottles with a marble inside them. Carbonation pressure forced the marble up against a rubber seal, thus keeping the drink from going flat in what was known as a Codd bottle.

Up front right of the marble sits a three-ring Minié ball from the Battle of Richmond. A fellow I worked with gave me the bent projectile. Did it strike a Confederate’s bone? We’ll never know but the Confederates prevailed that day in Richmond, Kentucky, routing Union forces.

Just behind the Minié ball is a rusty bolt but no ordinary bolt. It fell from my seat one Saturday in Sanford Stadium, home to the Georgia Bulldogs. Yes, I can say I own a piece of that stadium with its famous hedges, and by the way my seat is as solid as ever. To the far right of the bolt is a Morrow Mountain point I found on family land. To its left is a Dalton point I found as a boy. When I hold these points I connect with people long gone. Between the points is a magical antique marble I found in sand along the drip line of an old building. When light strikes the marble its surface turns silver and an iridescent ray of cobalt blue light shoots out its opposite side.

A man gave me the cube-like rocks to the left of the Dalton point saying Indians used them as money. That’s not true according to scholars but I keep them nonetheless.

That small blue bottle? It’s an antique bottle that held Vicks VapoRub. What makes it special is I found it in the sands of a large creek, having washed downstream from some home long gone.

I have as well an old bolt from the now-gone steel truss bridge that used to shoot Highway 47 over Clarks Hill Lake back home. I’d love to have a dollar for each time I crossed that vanquished bridge. That’s as close to a fortune as I come, though, for my collection is one of insignificant treasures. I have become the curator of my personal museum where mementos of special places and special times keep things in perspective for the truth is we’re all just passing through.

I suspect some of you collect things that would make little sense to others. Well, I get it. Keep them in a special place, and attach a note to each. Your heirs will thank you, and they’ll realize you weren’t touched in the head after all.