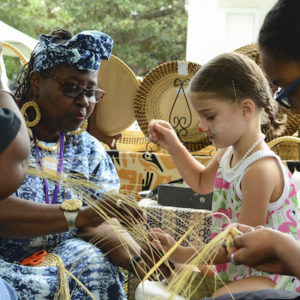 Join Historic Columbia at Jubilee: Festival of Black History & Culture from 11 a.m. – 6 p.m. on Saturday, Sept. 21. Now in its 41st year, this free outdoor festival brings musicians, artisans, dancers and storytellers together to celebrate South Carolina’s black history and culture on the grounds of the award-winning Mann-Simons Site.

“We are excited to bring families in Columbia and beyond a taste of what it is like to experience an urban renaissance in this year’s festival” said Na’Chanelle Brown, Jubilee Steering Committee Member and Festival Organizer. “It’s empowering to see a festival of this magnitude reach its 41st year with the same enthusiasm, creativity, and variety it has brought this growing community for decades.”

The music lineup will feature a variety of genres, including hip-hop, R&B, jazz, gospel and soul performances. To honor its 41st year celebrating the black experience, Grammy recording artist and multi-instrumentalist, Dwele, will headline this year’s festival. Hailing from the westside of Detroit, Dwele has gained visibility as an exemplar of R&B and soul music for over a decade with critically claimed releases and high-profile collaborations with hip hop artists like Kanye West and Oscar award-winning rapper/poet, Common to his credit. Deemed as “R&B’s Best Kept Secret” by legendary media personality Wendy Williams, Dwele scored two Grammy nominations for Album of the Year and Best Urban/Alternative Performance at the 50th Annual Grammy Awards in 2017, and has made special appearances on Jay Leno, Jimmy Kimmel, MTV (Europe), and BBC Studios Live.

Below is a full list of the festival’s entertainment lineup.

Throughout the day, guests are invited to take house tours of the award-winning Mann-Simons Site for $1 and the Modjeska Monteith Simkins House at no cost. Guests are also encouraged to take the Homeplaces African American Historic Sites Bus Tour for $2. The bus tours will take place at 1, 2, 3 and 4 p.m. The new exhibits and interpretation, which debuted in 2014 at the Mann-Simons Site, have received much praise, including the 2018 Southeastern Museums Conference’s Excellence in Exhibitions Gold Award, the 2018 South Carolina Historic Preservation’s Stewardship Award and the 2017 National Council on Public History’s Outstanding Public History Award.

The festival celebrations will kick off with an intimate book reading at Logan Elementary School with special celebrity guest, Karyn Parsons. Parsons is best known for her role as Will Smith’s ditsy cousin Hilary Banks on NBC’s The Fresh Prince of Bel-Air. Following her acting career, she produced Sweet Blackberry, an award-winning series of children’s animated films telling stories about unsung black heroes in history—featuring narration from stars such as Alfre Woodard, Queen Latifah, and Chris Rock. Parsons will be present during the festival with copies of her self-authored debut novel, How High the Moon, available for purchase and signing.

Jubilee is made possible by the festival’s generous sponsors and is a free community event that will be held along Richland and Marion streets outside of the Mann-Simons Site at 1403 Richland Street in downtown Columbia. Visit JubileeSC.org to learn more.

In November 1961, a small group of individuals intent on saving the Ainsley Hall House from demolition officially incorporated as the Historic Columbia Foundation. Over the next five decades the organization, which was founded on the premise of preservation and education, would take on the stewardship of seven historic properties in Richland County. Today, the organization serves as a model for local preservation efforts and interpretation of local history. Visit historiccolumbia.org or find us on Twitter, Facebook, Instagram or YouTube for more details.