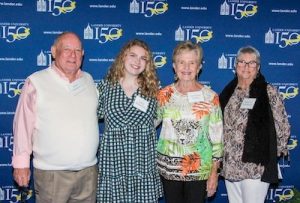 Behind every college scholarship is a story of dreams and a deep hope for the future.

That fact was evident at Lander University’s 38th annual Eleanor Teal Donor Appreciation and Scholarship Celebration as stories of academic success and generosity were the hallmark of the evening. The event bears the name of the past executive director of The Lander Foundation and vice president for University Advancement. Teal, a Lander alumna, was instrumental in the growth of The Lander Foundation Scholarship Program.

For Cyrus Kelly, a junior from Sharpsburg, Georgia, the funds provided through a Self Regional HealthCare Endowed Scholarship will support his dreams of becoming a nurse – a profession he chose because of his rare heart condition, known as Tetralogy of Fallot. The condition is caused by a combination of four heart defects present at birth and has led to multiple surgeries, including one last year.

“Self Regional Healthcare is giving me access to more resources than I ever had before,” he said.

After the deaths of her father and sister, a young, uncertain Reese Williams put her hope in Lander, where the “University transformed my life.”

Williams, a senior mathematics major from Lexington, said she was facing what she believed to be an uncertain future. But the Terry and Valerie Evans Scholarship and the Zeigler-Gregg Scholarship boosted her confidence and ability to succeed.

Last year, she spent 10 weeks working with NASA on a research project. The opportunity would not have been possible without the support of her professors and scholarships, she said. “Donors welcomed me on the elevator of success.”

David Lander Henderson, the great-grandson of the University’s founder, Samuel Lander, benefited from a scholarship when he studied history at Lander. Today, he and his wife, Betty Jo Henderson, and their family member, Ann Carol Corley, support multiple scholarships at the University, including one for Carley Mullenburg, a junior chemistry major from Leesville.

The scholarship is crucial to Mullenburg’s ability to pursue her goal of becoming a chemistry teacher. “I am paying for college myself,” she said. “I worked really hard in high school to be able to come to college and hopefully earn a scholarship for my education. Having this scholarship means that I can do what I want for my future, and I am very grateful.”

Henderson understands her sentiments. “Lander was most supportive of us through scholarships and academic programs. Lander nurtured us, and we wanted to do the same for others.”

Steve Bolton, a first-year scholarship donor, was a member of Lander’s first tennis team before becoming a helicopter pilot for the U.S. Army. After 21-year military career, Bolton worked in the defense industry. He established the Lt. Col. Steve and Linda Bolton Scholarship in memory of his late wife.

“It is just phenomenal to be able to give back and know that I can assist another Lander student in some small way,” he said.

The Boltons’ scholarship recipient, Alexandria Castro, a sophomore sociology major from Greenville, said the scholarship has strengthened her confidence. “It helps me realize that I’m doing the right thing … that focusing on my studies is making a difference,” she said. “I’m very thankful for my scholarship and to know that someone wants to support others in their future.” 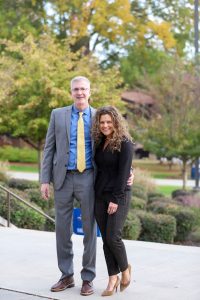 Lander University administrators shared numerous examples of the University’s growth, including a 53 percent increase in enrollment over the past seven years and unprecedented support from the S.C. General Assembly which is helping to fund 19 active projects on campus.

Dr. Richard Cosentino, Lander University president, said the support from donors is having a significant impact on graduates who are serving their state and nation and “indeed, the world.”

“Money doesn’t grow on trees,” he said in remarks directed at the scholarship recipients, and he encouraged them to “pay it forward” when they have the chance one day to help others.

Mary Holloway, wife of the late Maurice Holloway, a beloved Lander alumnus and member of the Board of Trustees, said she appreciates having the opportunity to share her husband’s love for Lander with others. ‘Supporting scholarships means that his memory will go on. It is very important to support this institution and the opportunities it provides for so many people.” 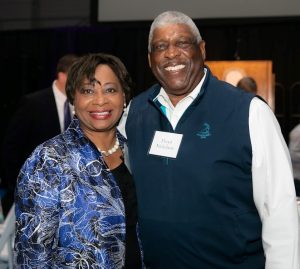 Henderson said he believes the University’s founder is proud of the institution of higher education, which started as Williamston Female College 150 years ago.

“This celebration shows the enduring impact that Lander is having,” he said. “If Lander had not made a difference in the lives of South Carolinians, the institution would not have lasted. Lander’s future seems very, very bright.” 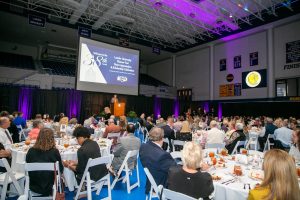