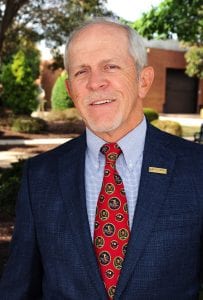 Tri-County Technical College’s Commissioners welcomed a new member to the governing board at a bi-monthly meeting October 7.

Larry A. Smith, retired plant manager for Schneider Electric in Seneca, attended his first board meeting since being appointed by the governor to fill the Oconee County seat vacated by Ham Hudson, who retired in June after serving 18 years on the board.

“When Senator Thomas Alexander called and told me Ham was retiring and asked if I was interested in being nominated to serve, I quickly replied yes, given my belief in Tri-County and all the good work the College has done and continues to do in preparing folks for the future,” said Smith. “I was honored to be asked because of the importance of the role and because of my respect for Senator Alexander and all he has done for our community and for South Carolina,” he said.

Smith says the 26 years he served as plant manager of Schneider Electric, as well as the eight years he served as president of the Oconee County Industrial Group, kept him aware of the educational and workforce initiatives developed and implemented by the College. He is a strong proponent of building and maintaining a skilled workforce which he says is critical for local industries to be successful. He says Tri-County Technical College has played a key role in much of the industrial growth of the three-county area.

In addition to his role with the Oconee County Industrial Group, Smith has been an active member on Tri-County advisory committees and served on Tri- County’s Foundation Board for seven years.

“Manufacturing folks must always strive to develop a pipeline of talent. In my experience, I found that Tri-County is a great asset to accomplishing that goal,” said Smith.

““The skills and knowledge of technical college graduates are invaluable for South Carolina’s business and industry success and equally important for the career opportunities for our people. With the unemployment rate at about three and one-half percent, finding qualified people for these skilled jobs is more challenging than ever. Tri-County also provides a golden opportunity for those folks who are unemployed or underemployed. A Tri-County education gives them a chance to step out of minimum-wage jobs by getting a certificate or a degree which positions them to make a positive difference in their lives,” he said.

Smith served as the industrial representative on the team that planned theCollege’s Oconee Campus and assisted the team with selecting the campus’ location and curriculum. He emphasized the importance of including CNC in its offerings based on input he had received from the Oconee Industrial Group members.

He also believes the Technical Career Pathways program gives students a running start. After one year in the pathways classes in high school and one year at Tri-County, graduates have the opportunity to secure a job at area industries, often making $35,000 – $40,000 a year straight out of school. “Their earning potential increases greatly and they have no large college debt because of the cost efficiency of these programs,” he said.

He says he hopes to use his manufacturing experience to support the mission and vision of the College and to be a contributing member of the Commission.

Smith says he is planning to reconnect with his former colleagues in the Oconee County Industrial Group to hear their business needs “first hand” to serve as a conduit back to the Commission with the intent of optimizing Tri-County’s offerings to best meet those needs. “My goal to help businesses, industries and working people to be more successful,” he said.

Smith holds B.S. and MBA degrees from the University of Pittsburg. In addition to being former president of the Oconee County Industrial Group, he is a member of the Foothills Area YMCA board, is a former member of SDOC Business Education Partnership and served on the Clemson University Continuing Education Board. He is an avid tennis player and competes regularly in the U.S. Tennis Association leagues.

He and his wife, Judy, live in Seneca. They have four adult children and 10 grandchildren.

Members of Tri-County Technical College’s Commission are appointed to a three-year term. The Commission meets at noon the first Monday of every other month.