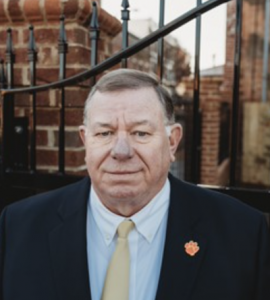 Laurens City Administrator Gary Coleman has announced his intentions to retire from his position with the City of Laurens effective December 31, 2021. Gary has served as the Laurens’ City Administrator for more than ten years, having been appointed to the position in January 2011.

During his tenure with the City of Laurens spanning the administrations of three mayors, among his many accomplishments, Gary helped lead the City through the COVID-19 crisis, restored stability to the City’s finances, and oversaw construction of The Ridge recreational facility and numerous upgrades to city facilities and equipment.

“After looking back upon my career and my time with the City of Laurens, I believe that now is the right time for me to step down as City Administrator,” Gary said. “We have had many great successes over the course of the past decade, which are due in large part to the great employees we have working for the City of Laurens, their departmental leadership, and the support we have received from our mayors and members of City Council. We work together as a professional and cohesive team, and I foresee nothing but great progress in the city’s future. I want to thank all those city employees with whom I have been blessed to work, our department directors, Mayor Senn and Council, and the members of the Laurens community who have given us their constant support and confidence. It is a blessing to be able to retire on good terms, leaving a city with stable operations, and poised for the exciting future that lies ahead.”

Laurens Mayor Nathan Senn said he has enjoyed working with Gary and is thankful for his dedicated service to the City.

“We are grateful to Gary for his service and leadership during the past decade,” Senn said. “He has been an unwavering partner and colleague, but during the past two and a half years of working together, I have also come to value him as a trusted advisor and friend. His cooperative leadership throughout the challenges of the pandemic have been vital to ensuring the continuity and quality of City services. Gary’s dedication to the people of Laurens is self-evident, and the accomplishments of his tenure will leave a lasting and positive impact on our future. He is a consummate example of a humble, faithful servant leader, he is a godly man, and I could not be more grateful for the opportunity to have served alongside him.”

Gary, a lifelong Laurens County resident, was appointed by City Council to serve as Laurens’ City Administrator in January 2011 during the administration of Mayor Sharon Brownlee. He continued to lead operations during the tenure of Mayor John Stankus and into the present administration. Prior to accepting his position with the City, Gary held management roles with two other venerable Laurens institutions, Palmetto Bank (2008-2010) and Laurens Glass (1974-1985). He also owned and operated ABCO Rents, a furniture and appliance retailer from 1985 to 2008.

After leaving his position with the City, Gary plans to enjoy retirement, spending more time with his wife, Jan Davis Coleman, his daughters, Sarah and Kate, his grandchildren, and his church family at New Prospect Baptist Church. Gary, a 1970 graduate of Laurens High School, earned a B.S. in Financial Management from Clemson University in 1974, and he has been remained an avid, loyal Clemson fan ever since. Though Gary will continue in his current position until the end of the year and assist with the transition to his successor, he looks forward to having more time to enjoy these things that make him happy.

Mayor Senn indicated that the City will begin the process of identifying its next administrator swiftly, but deliberately. That search has not yet begun and no potential candidates have been identified at this time, but the City intends to perform an extensive search to identify the right individual for the job.

“One thing we are particularly proud of here at the City is our stability,” said Mayor Senn. “Gary has been a tremendous asset in helping to build a culture of calm and stable leadership, and we will seek an administrator who will both work to carry on the stability of our operations while working to push us forward in achieving our greatest potential.”

“For now,” Senn added, “we want to show thanks to Gary Coleman for his years of service, and then do what we need to do meet the demands of the next chapter in our city’s history.”

Laurens’ City Administrator serves as the city’s chief operating officer. In this role, the City Administrator assists with preparation and management of the annual budget, and oversees nearly 100 full-time employees, all city departments, and facilities. The City Administrator oversees the day-to- day operations of the City and implements policies and objectives established by Mayor and the ordinances passed by City Council to provide services to the citizens of Laurens in the most effective, efficient, and economical manner.