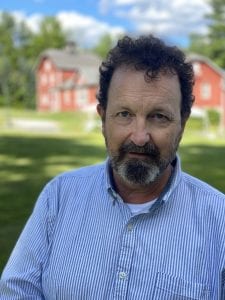 Laurens native Randall Parsons has been a designer in New York for the last 20 years. He’s worked for a theater company in Long Island, as well as in theater design, television work, and stints teaching at City University of New York as well as New York University.

The shows he was working on stopped when live performances including the theater went dark during the coronavirus pandemic onset. Parsons left his apartment in New York to his roommates to quarantine separately.

This past summer he headed to the Berkshires, where he works with the Berkshire Theater Group in Massachusetts. He was contracted to do four shows during the summer season.

One of the shows was “Godspell,” which Parsons first did as a sophomore at Laurens District 55 High School. “Godspell is” a 1970s musical based on parables from the New Testament. The show is now among the first two shows signed off by Actors’ Equity during the pandemic.

“We’ve been, of course, dealing a lot with Actors’ Equity, the actors union, and … ensuring that every step is taken to ensure maximum safety,” said Parsons, who majored in fine arts and studied theater and music at PC.

“What I have told people who have asked me about it is that it’s not about what you have to do to get away with doing the project,” he said. “Instead, what do you have to do to ensure the safety and then how much further than that can you go and still be able to do the project.”

The Los Angeles Times reported the show was a “test case” for “covid theater.” The New York Times said the socially distanced production is “a revival in every sense.”

The show is performed at a parking lot in Pittsfield, Massachusetts, next to its other theater. A limited number of tickets are allowed for the outdoor production, which wraps up this month.

The cast has been quarantined and are tested regularly for the virus. The crew had safe words during rehearsals. And Parsons designed rolling panels to separate cast members who also sing on stage.

“There are moments that you go like, ‘How are you going to do that without people touching people?’” he said. “But once you had set up what I would call the matrix, I guess, the audience understands that and accepts it.”

Summer theater brings Parsons to the northeast. What still draws him to the theater, in general, is simply his love for it.

Parsons was introduced to theater by a local teacher who directed shows at Clinton High School. One of the first rehearsals he remembers is “South Pacific.”

“I was just completely entranced,” he said. “That was it. I was hooked.”

Parsons continued studying theater when he went to PC.

“The whole idea of the liberal arts education being, not necessarily to teach you a trade, but to teach you how to continue learning the rest of your life — you’re constantly learning new things — this whole process has really called upon that,” Parsons said.

At PC, he took on an English major and declared a minor in French. After graduation, he remembers visiting campus for homecoming and a conversation with the late Dr. Rachel Stewart, from the English Department.

Parsons’ later experience included working in arts administration for the city of Nashville, Tennessee, until 1996, when he headed up to NYU’s Tisch School of the Arts. He earned a master’s degree in design.

He’s worked as an associate designer on Broadway, in art direction in television shows, regional theater, and commercial projects.

The Berkshire version of “Godspell,” based on the 2011 revival, is like none before. The audience must remain masked, seated 25 feet from the stage, in family groups 8 feet from one another. The cast also begins masked, although they may take them off at points at appropriate distances.

Parsons takeaways so far remain safety and listening to everyone — from the experts, local officials, crew, cast and union.

“The overall themes and story of this show in a lot of ways in this production are deepened and made more apparent,” he said. “It’s not your happy clown ‘Godspell,’ but I figure when your script is the gospel of Matthew, it’s kind of hard to go wrong.”