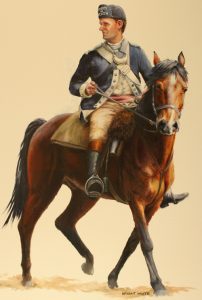 Hicks Chappell had an interesting Revolutionary War. He was captured twice by the British, and another time he and two other men captured 50 enemy soldiers on their own. During the conflict, he rose from private to the rank of major.

We know a lot about his revolutionary career because of the detail he put into his pension application. And we have much easier access to the information in that application because of the efforts of C. Leon Harris.

On Friday, Dec. 13, at noon at the South Carolina Confederate Relic Room and Military Museum in Columbia, Dr. Harris will deliver a free public lecture about what he has learned from the 24,000 applications that he and retired attorney Will Graves of Charlotte have transcribed over the past 13 years. The program is titled “Finding Your Revolutionary Roots: Exploring the service of American Patriots (and Loyalists).”

Dr. Harris is a retired college professor who taught biology, conducted research in neuroscience, and wrote books on evolution, physiology, and zoology in New York state. When he retired, his wife had had enough of New York winters, so they moved to Mt. Pleasant.

Doing some research on his family tree, he found an ancestor from out of North Carolina who fought in South Carolina during the Revolution. As he kept digging, he realized something he had never known before: “The Revolutionary War was fought and won right here in South Carolina” – and a lot of it right around Columbia.

One of those who did the fighting was Hicks Chappell, who eventually settled in the part of Richland County now known as Hopkins. Harris and Graves learned a lot about men like him from studying the pension applications, a project that Harris says “sort of took over my life.”

A lot of the Dec. 13 talk will center around Chappell and his varied adventures fighting Tories and redcoats in this part of the country, from Fort McIntosh in Georgia to the Battle of Fishing Creek, where he served under Thomas “Carolina Gamecock” Sumter and was captured by the notorious Banastre Tarleton.

After the war, Chappell got into politics. He was appointed one of Richland County’s first judges, then succeeded the first Wade Hampton in the S.C. House of Representatives.

As the title of the lecture indicates, Dr. Harris will also offer advice on finding your own Revolutionary War roots using such resources as the database he and Graves have built.