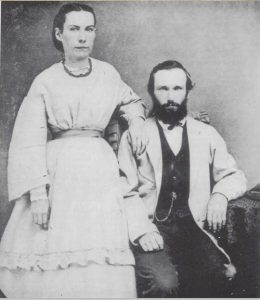 A lot of people have misconceptions about what women wore in the 1860s.

For instance, folks have some odd ideas about corsets. On Sept. 24th at noon at the South Carolina Confederate Relic Room and Military Museum in Columbia, Jamie Rae Adams will endeavor to set them straight. That’s when she will deliver a lecture titled “A Pleasing Effect in Air and Dress: Women’s Clothing of the Civil War Era.”

She’ll talk not only about how women dressed at the time, but why they dressed that way.

“Everything was done for a reason,” she says. A practical reason. And that includes corsets. She said people think corsets were all about cinching women’s waists to be drastically, unnaturally narrow – and that some women even had ribs removed to achieve a more dramatically waspish effect!

That one makes Jamie laugh. She notes that such elective surgery wouldn’t have been available until about the 1930s, and even if it had been, ladies wouldn’t have been interested. They weren’t trying to achieve a freakish effect. Instead, corsets were practical. They gave back support, so busy women could stay on their feet longer working around the house and on the farm.

“If you’re having children, of course, it will also keep your waist the same size,” she acknowledges. But that wasn’t for vanity. It was to keep women – who unless they were wealthy only owned two or three dresses – from having to make more of them by hand as their families grew.

Jamie knows what that kind of work is like, because she participates in re-enactments and living-history programs ranging from 1740 to 1940, and makes her clothing herself. And if the period is before about 1850, that means sewing it all by hand – the dresses and the multiple undergarments as well.

She started learning about this when she was in high school. At 15, she started working as an intern at the Lexington County Museum. “They have a really cool collection there of women’s clothing,” and she really got into learning more and more about “how clothing tells a story about somebody, if you really look at it.”

Not everyone has had the chance to do that. And too many people, she says, get their ideas about Civil War clothing from “Gone With the Wind,” which is a problem.

That film wasn’t reality, it was a “romanticized, 1930s version” of what the 1860s were all about. And while she didn’t live in the 1860s, she has learned from studying the real thing. “I’m all self-taught,” she says, having gained understanding not only from seeing, wearing and even making the garments herself, but from “many long hours in the state archives and museums,” reading first-hand accounts and “period tailor books,” which still include the original patterns.

What interests her is less the way Scarlett O’Hara or even the real-life Mary Boykin Chesnut dressed and lived, and more the way ordinary women did. “I try to get as close to what people around here where I’m from, Lexington, wore.” In the movies, you see the fancy people. “You don’t see true, middle-class farming women. I try to bring that into play.”

She will do so in her talk at the Relic Room, the museum’s first live Lunch and Learn program since before the pandemic started shutting things down. The lecture is free to the public, and attendees are welcome to bring a lunch and enjoy it while they listen.