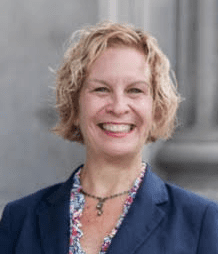 I confess. I’m a word nerd. For me, writing is a passion, not just a way to communicate.

I see writing as an intersection of creativity, experience, knowledge and connection. It’s an art and a science where clarity and crisp communication converge with inspiration and flow.

Writing, editing and proofing are a fun puzzle, not a dreaded chore, for me. I love reading anything connected to words and language. The day the new AP Stylebook comes out is always reason for celebration. I’m on a text thread with several friends who love trading messages when we find atrocious editing errors in newspaper headlines. And doesn’t everyone still have their high school grade grammar book? 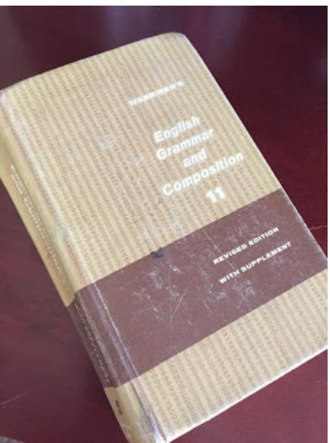 Working with a good editor is a writer’s nirvana for me. There’s usually a way to tighten things up a bit, improve the flow or find a more vivid word. I’m constantly trying to make my personal writing more creative, open and insightful and work toward clarity of message and purpose in my professional writing. I stopped striving for perfection in both types a while back (thus the need for a good editor), but that doesn’t mean I stop trying to improve. In most cases, the rules of grammar are what help me fine tune my writing.

In my professional life, I’m an evangelist for the notion that good writing is critical in any career. Strong writers also tend to be sharp critical thinkers. They are the people leaders want around them to help flesh out ideas and communicate those ideas creatively.

However, good ideas go nowhere if the writer can’t express them clearly and concisely. Grammar, spelling and punctuation rules are what bring clarity to big ideas.

When I get bogged down in refining an idea or condensing a complicated concept, I can almost always conjure up a grammar rule that will help solve the problem. Did I place a modifier incorrectly? Have I buried the point under mounds of adjectives? Did I let an inappropriate passive voice sentence slip in? Does a misused punctuation mark make an important point unclear? Did a run-on sentence garble a strong idea? Are all my subjects and verbs in agreement? The rules of grammar can almost always help me get out of a stuck place.

After several recent close calls that stopped short of life threatening when I was arguing over the importance of a grammar edit, I’m wondering if it’s time to take this mild obsession with writing rules and convert it to a full-blown movement.

It’s time to make good grammar relevant again! (The rare use of an exclamation point is intentional here.) Maybe we need a National Grammar Month or a Ditch the Improper Punctuation Week when we grammar nerds can rise up together in support of good writing habits.

Unfortunately, in today’s world, grammar rules seem to be less urgent. Obviously, our digital culture has contributed to this decline. Add to that an increasing informality in many professional environments, and we see more and more liberties with language, grammar rules and sentence structure.

Over the years, colleagues, friends, family members and students have challenged my obsession with words and rules. They have questioned whether grammar rules are still relevant. When a student recently asked why it mattered if she knew the rules for using “I” or “me” as a subject or object, I was stunned. She said, “It sounds just fine to my ear to say ‘She’s going with Mary and I.’”

I hear very smart people using this incorrect construction daily. They think it sounds fine, but it’s not. Why should grammar rules be any less important in a professional context than accurate formulas are for calculating interest or precise procedures are for diagnosing an illness?

Unfortunately, the writing profession doesn’t have formal accepted practices governed by some appointed board like the accounting or legal professions do. We can’t be censured for improper use of participles or ending a sentence with “at.” We editors and writers have to police ourselves.

Sure, we have our grammar rule books and style guides, but these vary by profession, publication styles and audience. Given these often confusing rules, we sometimes find it easy to get sloppy in writing and editing and choose to think “well I know that’s right in one style book” or “it sounds right to my ear.”

We could get bogged down here in arguing the merits of various style guides or the use of the Oxford comma, but that’s not the point. The point is grammar rules provide consistency which leads to clarity of message. That’s what good writing is all about.

Follow the rules, and the reader is more likely to understand your idea. It’s hard enough to keep a reader’s attention in today’s digital world. Why make it more difficult?

So, I’ll start this grammar movement with my short list of five rules that are never negotiable:

1 – “She is going with Mary and I” will never be correct. Ever. For any reason.

2 – Dangling participles are insidious gremlins. (A participle modifies like an adjective does, so it must have a noun to modify.) They often go unnoticed in writing because our ears are so accustomed to hearing them spoken. You are likely to get the gist of what the speaker means if she says, “Opening the door, it was time for everyone to enter.” But, “it” didn’t open the door, and this construction can lose a reader who has to stop and think about who opened the door.

3 – Spelling is spelling. Period. Creativity isn’t an option in spelling.

4 – Apostrophes indicate possessive not plurals. Merry Christmas from the Smith’s. The Smith’s what? (a timely reminder during the holiday season)

5 – I believe the serial comma isn’t necessary, but I’m not going to touch that word nerd debate in mixed company. This provokes as much controversy among writers and editors as the preference of vinegar versus mustard sauces does among BBQ aficionados. Just decide how you’re going to use a comma in a series, stick to it and make sure your writers do the same.

But … in the interest of avoiding the label of chief enforcer for the grammar patrol, I offer up a few rules this writer fudges on a bit. We all have our own. I’ve already used a few in this piece.

There’s a time and place for being a little rebellious as a writer. Sometimes creativity has to win out over the rules. My personal guide for breaking a writing rule is to do it consistently, deliberately and with reason.

Here are a few of the rules I allow my inner grammar patrol to occasionally ignore:

1 – Sometimes it’s acceptable to end a sentence with a preposition. The old example of something “up with which I will not put” is awkward construction, no doubt. In today’s world, that kind of writing sounds stilted and overly formal. But saying “where’s it at” should never be acceptable. Know your audience and use a preposition at the end of a sentence if it’s something you can live with.

2 – Sentence fragments and single word sentences can occasionally help make a point. Admittedly this loosening of a rule is partly due to today’s texting society, but sometimes a fragment can add emphasis in more informal writing. Right?

3 – Starting a sentence with a conjunction can improve a transition or be a bridge between ideas. But know when to use this construction appropriately and use it sparingly.

4 – The rule of split infinitives may just be outdated. This rule has been around since the dawn of time … or at least the dawn of Latin. As long as the meaning is clear, I believe it’s alright to occasionally split the infinitive.

Before I officially launch this grammar movement, I’m off for some light reading in the Elements of Style. This newest edition of this classic has lovely whimsical illustrations by the artist Maira Kalman. Her cover art of a self-satisfied basset hound caught my eye when I first saw the book at Litchfield Books. And while I do love the art, the juicy rules and vibrant writing commentary keep me turning (and scribbling on) the pages. 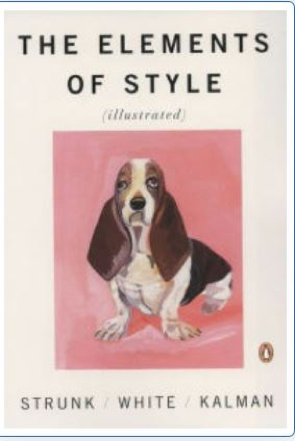 After more than 35 years working in communications, politics, management, fundraising and government relations, Reba Hull Campbell is taking a gap year as a rookie retiree to figure out what she wants to be when she grows up. She’s stayed busy in her gap year teaching a class in the UofSC School of Journalism and Mass Communications and doing some freelance writing. Reba is passionate about travel, writing, learning to play the uke and keyboard, and staying connected with old friends. Reba can be reached at [email protected], @rebahcampbell on Instagram and Twitter, or through her blog at http://bit.ly/RandomConnectPoints