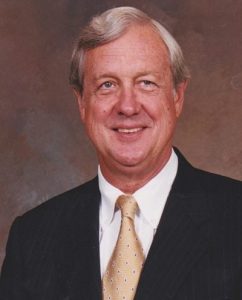 Lloyd I. Hendricks, a longtime banker, attorney, legislator and civic leader, has been named to the Executive Committee of the Business Development Corporation of South Carolina (BDC).

Hendricks began his banking career at the former First National Bank of South Carolina in 1968 after graduating from USC’s Law School.  He later held senior management positions at Southern Bank & Trust and First Union National Bank before joining the South Carolina Bankers Association as President/CEO. He retired from the SC Bankers Association in 2012 where he was credited with many successes in state and federal legislation, economic development, financial-literacy efforts, and sound financial association management.

Hendricks also served five terms in the S.C. House of Representatives from 1976 to 1986 and received awards and special recognition as Legislator of the Year from the SC Chamber of Commerce in 1984, The Greenville News in 1985 and was awarded the Order of the Palmetto by Governor David Beasley in 1997.

He has been a BDC board member since 2002 and a member of the South Carolina Bar Association, as well as president of the Ex Libris Society of the USC Libraries and Hendricks Forest Holdings LLC.  He is a member and elder at Eastminster Presbyterian Church.

Hendricks has held numerous other leadership positions over the years, including Congaree Land Trust, S.C. Transportation Policy and Research Council, March of Dimes, Easter Seal Society, Boy Scouts, USC Education Foundation, as well as member of the Board of Visitors of both Clemson University and the Medical University of SC.

“I was delighted to be asked to join the BDC Executive Committee. Being able to contribute in any way I can to the advancement and economic development of South Carolina has been a passion and a privilege for me, and helping BDC help entrepreneurs across the state finance their goals and dreams is a great way to continue doing just that,” Hendricks said.

“We’re pleased and privileged to welcome Lloyd Hendricks to our Executive Committee,” said BDC CEO and Board Chairman Edwin O. Lesley. “His broad, deep combination of civic, business, legal and legislative engagement gives him a perspective that will truly be an asset for us now and in the years to come.”

About BDC and CDC

Since 1958, Business Development Corporation (BDC) has been financing small businesses in South Carolina, ultimately creating new jobs for the citizens of the Palmetto State. BDC and its associate company, Certified Development Corporation (CDC), which was founded in 1994, have approved more than 2,745 loans on projects in excess of $1.7 billion, making us leaders in economic development lending and job creation in South Carolina. Now that BDC has been approved by the state and SBA to operate in seven (7) Southeastern states, we are able to bring these benefits to a much larger market area. To learn more about BDC and CDC, visit www.BDCofSC.org or call 803.798.4064.