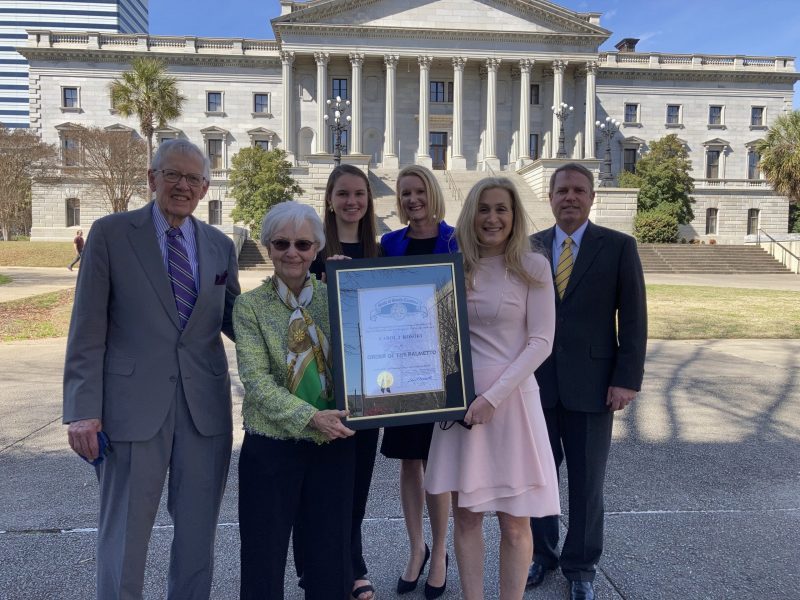 The family of Carol Kososki joined Kososki as she was presented the Order of the Palmetto at the S.C. Statehouse on March 11

Carol Kososki, a longtime chair of the Richland County Conservation Commission (RCCC), has been awarded the Order of the Palmetto, the state’s highest civilian honor.

Kososki received the honor for her 48 years of dedicated service to South Carolina, which includes her time as a state employee and as a volunteer post-retirement, including 14 years with the RCCC. S.C. Rep. Beth Bernstein presented Kososki with the award March 11 outside the Statehouse. 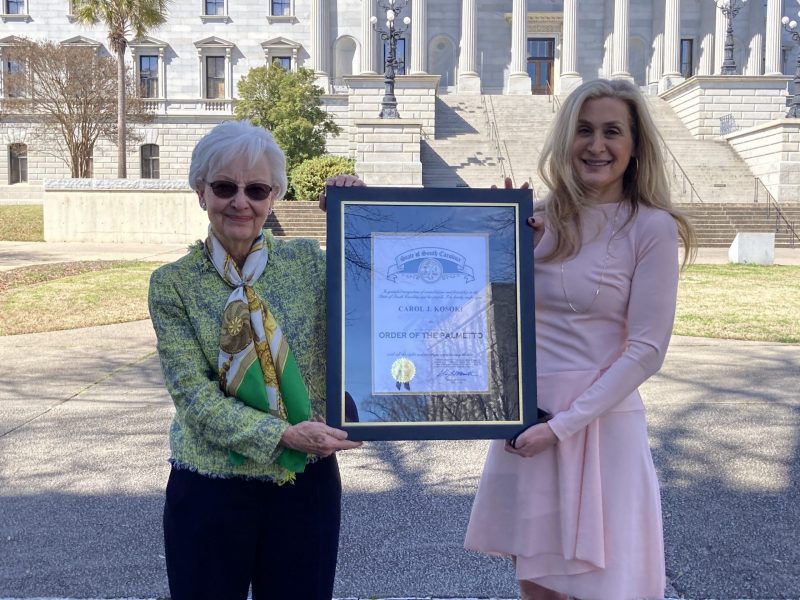 “I was blessed with a lot of energy in my life,” Kososki said. “I grew up in a family where I was expected to use a lot of energy and exert myself. I just feel very honored. This is an extremely important occasion in my life.”

Advocating for land, water and history

Appointed to the RCCC in 2006, Kososki led the commission from 2009 to 2020, dedicating her retired life to conservation efforts.

In her time as commission chair, Kososki was instrumental in various efforts, including:

Kososki’s commitment to conservation extended to her work with the Gills Creek Watershed Association (GCWA), both as an active member and as a two-time board member and chair from 2008 to 2017. During that time, she helped secure recurring funding from Richland County’s Stormwater Management Division to hire an executive director for the GCWA, which collaborates with Stormwater and the County’s Conservation Division.

“I have always had a concern for the world around me,” Kososki said. “It’s my worldview that people need to be doing what they can do to help. If you’re not part of the answer, you’re part of the problem.”

Kososki’s history of service to the state also includes stints working in the Governor’s Office (1972-1978) and then with the Employment Security Commission (1978-2005), as the first executive director of the S.C. Occupational Information System, a statewide computer network for career development.

Her work in vocational education and career development earned her the Spirit Award, the highest honor from the American Vocational Association and the Air Force Recruiting Service, in 1996 and the Outstanding Service Award from the Association for Career and Technical Education in 1998.

In addition to her time with the RCCC and the GCWA, Kososki’s volunteer work post-retirement has included helping to enact a tree protection ordinance for the City of Forest Acres, hosting fundraising events for the S.C. District of the Metropolitan Opera, and serving on various community boards and commissions.

“Carol’s tireless service and profound leadership both in and out of government is a blueprint for all of South Carolina’s citizens on how to improve our common good,” said James “Buddy” Atkins, Richland County Conservation commissioner. “We will greatly miss her leadership and passion for public service.”

After announcing her retirement as RCCC chair this past January, Kososki plans to refocus her volunteer time going forward. She will officially leave the commission when County Councilman Overture Walker, District 8, selects a new appointee.