Another world entire hides along lesser-traveled roads. Do yourself a favor. Look for it.

The day after Christmas I drove to Tignall, Georgia, to explore places I’d not seen and find Jackson Crossroads Amethyst Mine. I didn’t go on a whim. My Granddad Walker, just fourteen, was plowing a field when the mule reared up. “Heave-ho, mule.” Up shot an amethyst cluster. I think that cluster was in the vein that runs through Jackson Crossroads for Granddad’s plow and Jackson Crossroads are in the same neck of the woods, as the older set would say.

And Tignall? When a girl, my mom’s social life involved events in Tignall. Memories and amethyst were about to lead me to an old home place, church, and homestead but I’d never make it to the mine.

Up Highway 79 I drove turning left onto Delhi Road, a strange name for a walled city in India, but pronounced “dell hi” by local Georgians. Delhi Road runs southeast to Tignall, a town for which nothing explains its name. Along Delhi I saw a self-made tribute to country stores you see here and there. A fellow plasters old Nehi, Royal Crown Cola, and Gulf Oil signs all over a black clapboard structure and from afar you think, “Ah, an old country store.”

What I saw next pulled me over to a grassy shoulder drenched by two days’ rains. A home of the old days sat amid fallen trees. Like fiddlesticks, five large oaks had fallen in different directions as if divine intervention had spared the spider-web-covered home, and it was divine for an old pew on the porch gave the old house a Sunday come to meeting air. Walking toward the pew I spied a doll of the old days, made from rubber, with the left leg missing. Amputated. A grieving iron bed leaned over the doll’s feet. Fallen leaves the color of dried blood spilt around the doll cementing the effect. I’d stumbled onto a murder. 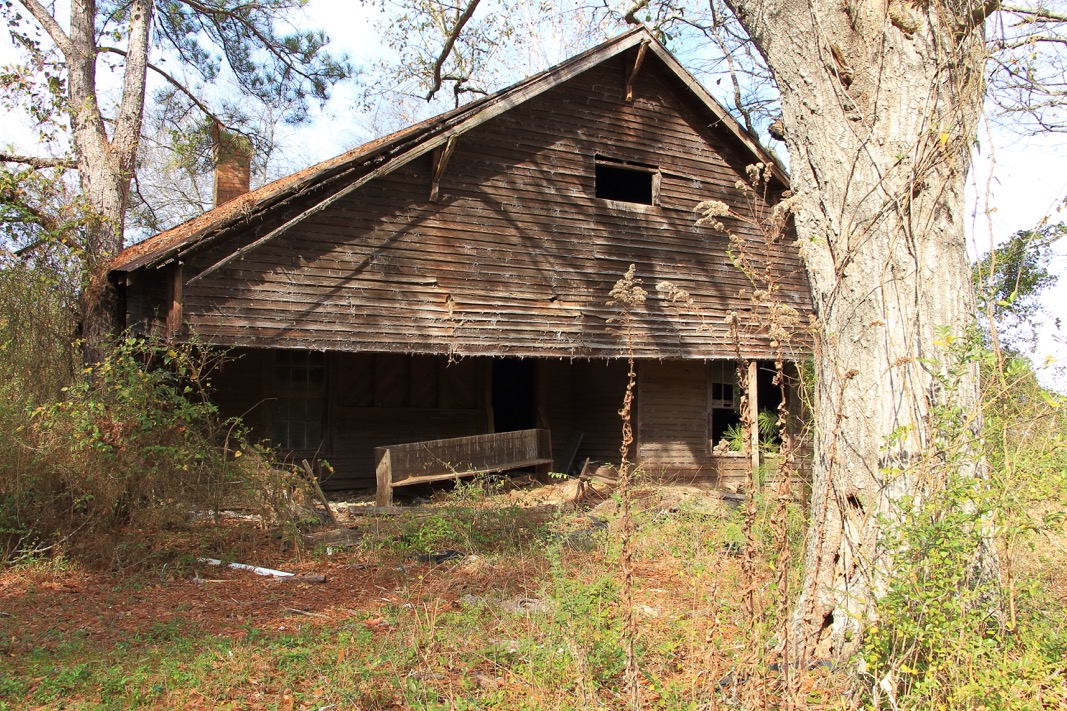 Peering through a window I saw an old fireplace old folks whitewashed with kaolin come Saturdays. To the right, a tattered blue recliner offered a comfy spot for the owner’s ghost to sit and reflect. Broken windowpanes and stringy spider webs spoke of desolation. Despite spiders, suspicions of ghosts, and a murdered doll, the scene from the highway served up beauty and a vivid reminder that we sojourners leave homes, beds, dolls, and other memorials in our wake. As I said, another world entire, an ancient one, hides along lesser-traveled roads. Seek it.

I motored into Tignall to find the Jackson Crossroads Amethyst Mine. In the post office the lady in charge answered my question. “I’m not from around here.” Across the street I spotted a one-legged old timer in an electric scooter. “That fellow will know where the mine is.”

Wearing camouflage and smoking a cancer stick, he sounded as if a rasp had grated his vocal chords after which he gargled a slurry of moonshine and gravel. “Take a left at the light. Go to the end and turn ????.”

This fellow’s not long for this world I thought. Eight miles later I turned left when I should have turned right. I spent the next hour looking for the mine. A lady in a convenience store set me straight, being local and not from Delhi, India. I found my way and set out on a red clay dirt road marred by potholes, gullies, ridges, and wallows. I should have been in a Jeep.

I passed a granite marker high upon an embankment but just ahead the granddaddy of mudholes lay before me like an orange lake. I turned around and stopped at the old granite marker to salvage something from my dirt road defeat. Climbing the steep embankment 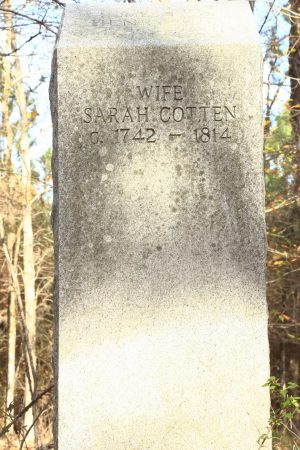 I surveyed the marker. Words were inscribed on the front of the tall and narrow stone marker.

These words were inscribed across the marker’s beveled top.

I imagined the log home that might’ve stood where woods reigned. Ashes to ashes, dust to dust, woods to woods. As I descended the embankment, rain-slickened leaves sent my feet flying and I landed flat on my back. “Ooooomph.” The wind left me as the camera and tripod went one way, I the other. No one but birds and the ghosts of Sarah and John witnessed my fall. I felt as old as Methuselah.

On my meandering, aimless way back the back roads presented another gift, Friendship Baptist Church. I passed it, turned around, and drove onto its grassed-over lane past the church’s tombstone-like marker. 1831. Times are you step onto sacred ground. You feel it. No one needed to tell me the church was dormant. I fell in love with this bleached out old woman of a church.

Upon a knoll she sat, regal in her antiquity, on piers of mud-colored bricks. Locked double doors like worn mahogany looked out upon the graveyard. High above the doors remnants of a massive hornet’s nest clung to the right side eave. Then I saw it. It. A sarcophagus with one side fallen away.

Morbid curiosity has long plagued me. I’ve long wanted to peer inside a grave and see the skull, bones, perchance a gold ring on some finger separated from its brethren. I walked over and quietly placed my tripod and camera on the ground. Closer still … I saw a round white object. Closer still. Flint rocks covered any chance to see bones. I knelt, not in reverence, but to see better. As I did, a cottontail rabbit bolted from the tomb scaring the hell out of me. “Damn,” I said aloud. This resting place of a woman who died in 1865 had sent my heartbeat from 50 beats a minute to 106.

In all my cemetery explorations I have never seen so many broken and toppled tombstones. Although he sleeps his memory doth live and cheering comforts to his mourners give He followed virtue as his truest guide Lived as a Christian as a Christian died … And another … Thy form alone is all, thank God that the grave is given for we know thy soul the better part is safe yes, safe in heaven

To the right front of the church a wrought iron fence surrounds a stone coffin. A cemetery tree, a thick cedar with bark shredding into ribbons, stands over the plot. Toward sundown the sun turns the wrought iron shadows into comb-like teeth and western light makes it hard to tell cedar roots from fallen limbs. Life and death at a glance but what struck me most was a window unlike the rest. Its venetian blinds, broken and mangled, cascaded in an arc within a window whose panes bear bullet holes. We live in such a glorious age. 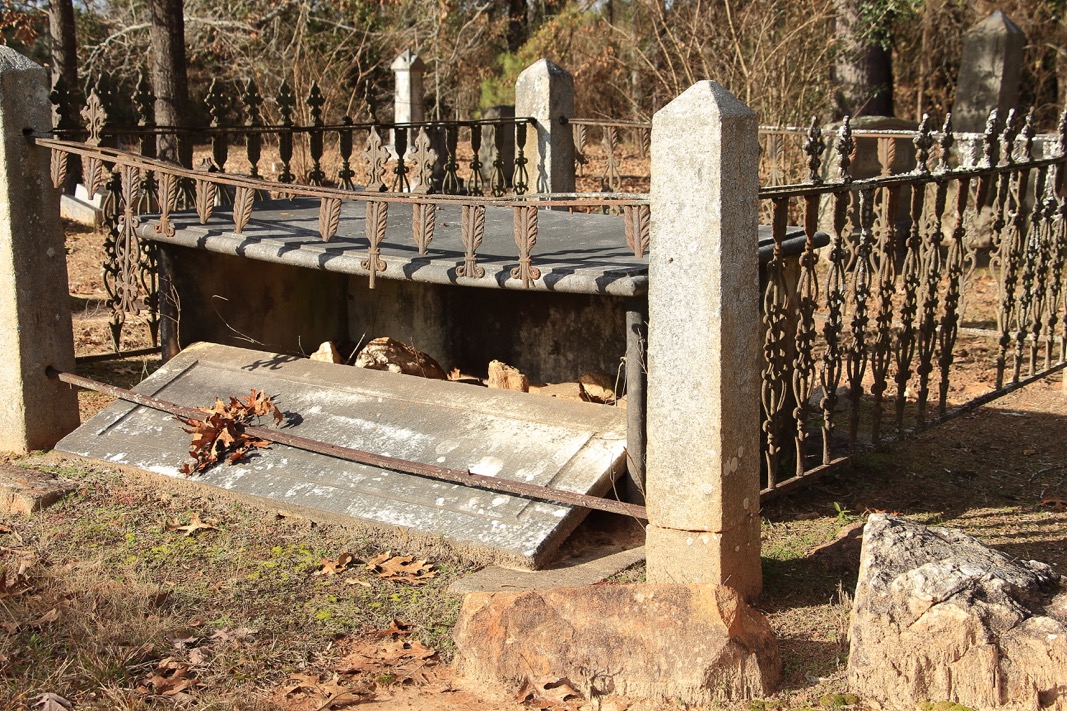 Friendship Baptist Church. I had taken so many random roads to come by it I had no idea where I was. I was lost in amethyst country, but I drove on blind, knowing I’d find my way. And I did. Close to Anthony Shoals I realized I was near my Granddad Walker’s old home place.

In my heart, I had come full circle. As I drove by Mom’s childhood home, I realized just how this part of Georgia has avoided the modern blight that ruins all it touches. Some will say this land is backwards. That it’s poor, no place to live but I disagree. It’s rich because of what it does not have. No cheesy strip malls. No dollar stores. Not even much as gas stations go. Just old homes, old churches, and one cottontail rabbit that about gave me a heart attack. Thanks to that startling moment and my amethyst country ramble, I came away feeling more alive than ever, a feeling folks mired in modern monotony miss.