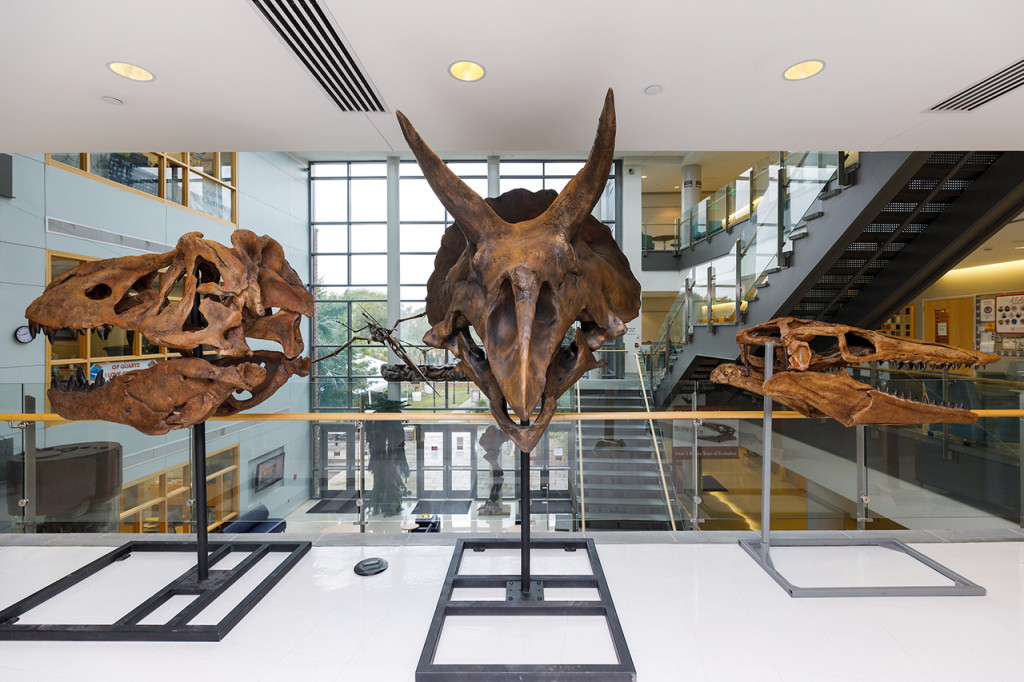 The Mace Brown Museum of Natural History at the College of Charleston has a couple of new residents. Casts of skulls of a Triceratops and a Tyrannosaurus officially made their debut as the newest members of the museum on Oct. 6, 2020, during an unveiling in front of the museum located inside the School of Science and Mathematics Building.

And one of these dinosaurs is kind of a big deal. A really big deal.

The Tyrannosaurus is a cast of the T. rex named “Scotty,” the largest T. rex ever discovered. Geology professor and Mace Brown Museum Curator Scott Persons was one of the members of a research team that unearthed Scotty in Canada in 2011.

The Triceratops and Tyrannosaurus are joined in the exhibit by a third skull. It belongs to a Tylosaurus – a giant sea lizard – already part of the museum’s collection. The Tylosaurus has been moved from its old position in the museum gallery to this more prominent spot next to the dinos. All three prehistoric beasts lived in North America, during the Late Cretaceous.

“This new exhibit is the first stage in a three-year plan to expand and renovate the Mace Brown Museum,” says Persons.

The next stage of enhanced offerings from the museum is a video tour on the museum’s YouTube channel featuring a series of videos highlighting some of the museum’s prominent specimens. The online tour is launching this week.

And creating a strong online presence is key for the museum, which is closed to the public due to the coronavirus pandemic.

“We want our students and the larger community to be able to experience the museum, even though the pandemic has forced us to temporarily close our doors,” says Persons. “My hope is that the online tour will be a resource for earth science teachers across the nation. We need science outreach efforts like this more now than ever.”