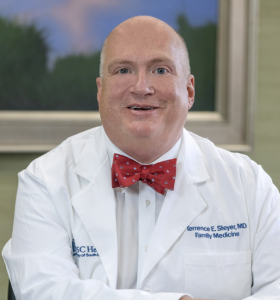 After a national search process, the MUSC Board of Trustees voted to approve Terrence E. “Terry” Steyer, M.D., MUSC Department of Family Medicine chair, as the new dean and vice president of Medical Affairs for the College of Medicine. Steyer has served as interim dean of the college since April 2022.

“The board is thankful for Dr. Steyer’s interim service as dean, and we look forward to his leadership of this incredibly important statewide resource for the education of some of the country’s finest physicians, as well as helping to drive our research and clinical enterprise to new levels,” said James Lemon, D.M.D., MUSC Board of Trustees chair. “Dr. Steyer is capable, skilled and connects well with students and faculty, which will enable MUSC to reach its full potential.”

Steyer earned his bachelor’s degree in mathematics from Allegheny College and his medical degree from Case Western Reserve University. He completed his family medicine residency training at Wake Forest University Baptist Medical Center and the Robert Wood Johnson Clinical Scholars Program at the University of Michigan.  Steyer began his academic career at MUSC, serving as the director of the Trident – MUSC Transitional Year Residency and director of a medical school course on evidence-based medicine.

In 2009, he was recruited to the Medical College of Georgia – University of Georgia Medical Partnership where he served as the founding chair of the Department of Clinical Sciences. In this role, Steyer developed and managed the third- and fourth-year medical school curriculum for a new branch campus of the Medical College of Georgia. Steyer was recruited back to MUSC in 2014 to serve as chair of the Department of Family Medicine and was named the first Gregory-Chandler Endowed Chair in Family Medicine in 2015. In 2017, he was named chief of the Primary Care Integrated Center for Clinical Excellence (ICCE) and president of Carolina Family Care. In these roles, Steyer served as leader of primary care efforts across MUSC Health. In 2021, he was elected by his peers to serve as president of MUSC Physicians, the faculty group practice. Steyer is an active member of the American Academy of Family Physicians and the Society of Teachers of Family Medicine, for which he served as national president from 2009 to 2010. He is an active researcher in the area of health care policy and leadership development for health care professionals.

In addition to offering his congratulations and endorsement of Steyer’s selection as dean, noting the “outstanding job” that Steyer has done since April, MUSC President David J. Cole, M.D., FACS, shared some key achievements and updates since the prior meeting spanning the education, research and clinical missions of the institution. Some specific highlights included:

The ACGME accreditation is a necessary step to moving forward with an overarching strategy to improve the physician pipeline throughout the state by establishing new residencies. Cole emphasized that the effort received early support and enthusiasm from The Darla Moore Foundation, which awarded MUSC $1.5 million in support of primary care GME programs, and the Pee Dee Medical and Health Science Education Consortium (PDMHSEC), which also approved $1.5 million in support of the primary care GME.

Patrick J. Cawley, M.D., MUSC Health System CEO and executive vice president for Health Affairs, University, received approval from the board to pursue an expansion of clinical space at the MUSC West Ashley Medical Pavilion to support the need for more endoscopy procedure rooms, as well as approval to pursue a certificate of need to re-locate clinical services and physician offices currently at Rutledge Tower, an aging facility, to a new facility that would be constructed on the corner of Bee and Courtenay streets. This project would occur in parallel with the construction of the new College of Medicine building planned nearby to achieve efficiencies and cost-saving goals for the enterprise.

The board also voted to approve the MUSC 2023 Commencement speaker, Theresa S. Gonzales, D.M.D. An award-winning educator and administrator serving the dental profession for more than 40 years, most recently she served as the executive director of the American College of Dentists.

After more than 30 years of distinguished military service, she retired from the United States Army with the rank of colonel. She was the nominative selection as the director of strategic communications for the Army Surgeon General in Washington, D.C. and commanded formations in Africa, Europe and the U.S. Prior to her successful command selections, she served as the director of Orofacial Pain Management and as a staff oral and maxillofacial pathologist at Tripler Army Medical Center in Honolulu, and as an oral and maxillofacial pathologist at Walter Reed Army Medical Center. A highly decorated military officer committed to veterans’ causes, she received the Order of Military Merit and the Surgeon General’s designation for clinical excellence, as well as the Outstanding Clinician and the Outstanding Dental Leadership awards from the James B. Edwards College of Dental Medicine. She graduated with distinction from the College of Charleston and received her dental degree from MUSC. She began her military career at Fort Jackson as a resident in the Advanced Education in General Dentistry program and completed her residency training in 1992 at the National Naval Medical Center in Bethesda. In 2006, she completed a two-year fellowship in orofacial pain at the Naval Post Graduate Dental School and completed her master’s in science in health care from George Washington University. Gonzales has published more than 75 articles in peer-reviewed journals, 11 book chapters and served as a reviewer for seminal publications in her area of expertise.

The MUSC/MUHA Board of Trustees serve as separate bodies to govern the University and hospital, normally holding two days of committee and board meetings six times a year. For more information about the MUSC Board of Trustees, visit academicdepartments.musc.edu/leadership/board/index.html.

Founded in 1824 in Charleston, MUSC is the state’s only comprehensive academic health system, with a unique mission to preserve and optimize human life in South Carolina through education, research and patient care. Each year, MUSC educates more than 3,000 students in six colleges – Dental Medicine, Graduate Studies, Health Professions, Medicine, Nursing and Pharmacy – and trains more than 850 residents and fellows in its health system. MUSC brought in more than $297.8 million in research funds in fiscal year 2022, leading the state overall in research funding. For information on academic programs, visit musc.edu.