You and I are here just for a bit, and so are the things we build. Nature is here forever and she never sleeps. I can take you to a house that kudzu owns. You can see the powerline that runs into a towering mound of green leaves, but that’s it. The green voracious vine has eaten the house entire. I can show you a country store overtaken by vines. See it in person on Highway 191 in Eureka, South Carolina. See it now. It’s the photo you see here. It’s beautiful in some strange way, though I’m sure its long-gone owner, were he to return, would break out the shears and clip away the vines.

Man builds things but when he turns his back on them the least bit, here comes Mother Nature. I’ve seen abandoned tractors barely recognizable because vines cover them. I’ve seen trees growing up through the bed of pick-up trucks.

Ever noticed how vines crack sidewalks? Driveways get the same treatment. This past Sunday I got down on my hands and knees for over two hours hand pulling weeds from my parent’s driveway. The smallest of openings in the asphalt had let weeds, grasses, and mystery plants pop into sunlight and grow. I had to use a pocketknife to cut away the roots of one small plant that was tougher than nails. Had tiny feathery leaves similar to a Formosa tree. 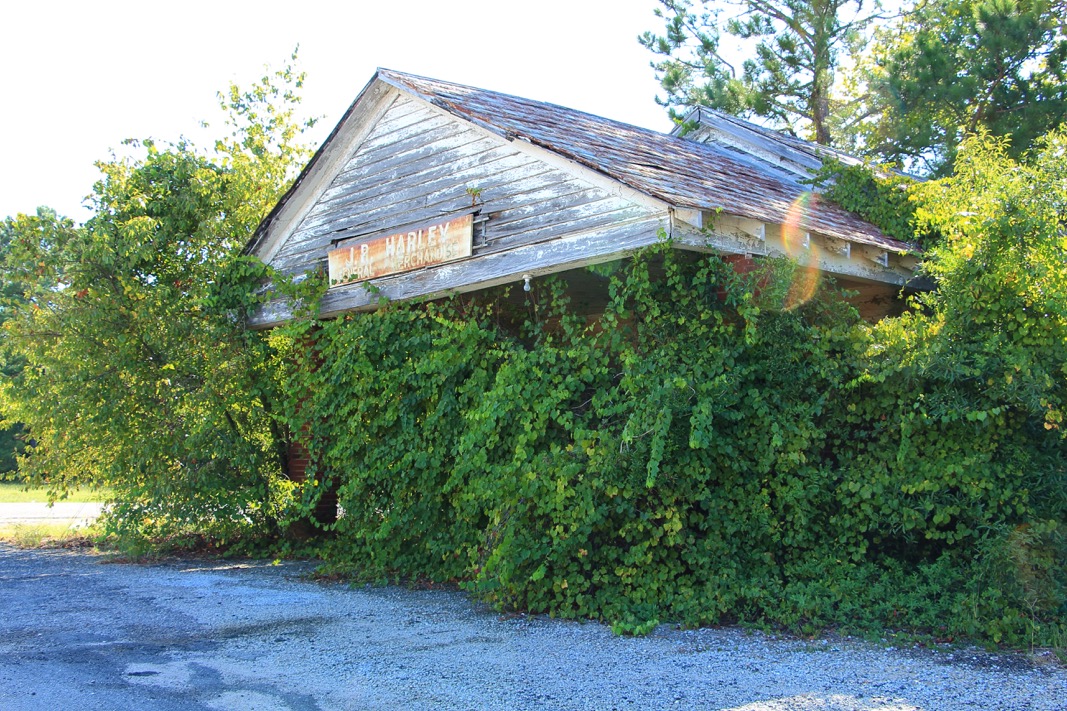 Removing vines from the homeplace is a never-ending task. During the growth season vines grow with a vengeance. I cut them away at ground level and a month later they’re back. Vines and all manner of green woodsy stuff pop up, ooze from the ground, creep along walkways, and wind up and around gutter’s downspouts. At the same time, leaves, acorns, small limbs, and twigs come raining down. It’s a battle on two fronts, and it demands weapons such as rakes, leaf blowers, shears, and wheelbarrows. Entire industries exist solely to stem the green wave of growth that explodes spring and summer. Nature fights back using a relentless weapon called “time.” Nature wins ultimately.

As an artist of sorts, I find it beautiful when nature reclaims the space some forgotten house or store sits in. It’s uplifting in some unexplainable way to see vines covering man’s structures. I can take you to a place where kudzu has climbed and taken over an old windmill. Photogenic? You bet.

Like you, I like order and I too wage a losing war against nature. I’m no fan of Roundup, and I have no clue if it is similar to Agent Orange as some claim. Nor am I sure that global warming is real. Climate change takes eons and man is a Johnny come lately, truth be told, but one thing I see amazes me. Tear down a building that has stood for 100 years, and the desert-dry powdery dirt beneath it sees the sun again. Rains fall upon it anew, and seeds, spores, and rhizomes and roots soon turn it green. I find that reassuring.

For now, though, green insomniacs surround us. We sleep but they never do. Oh, we get a bit of a break come winter when some green things go dormant, but come spring, clippers, rakes, weed eaters, and lawnmowers do battle again. Ultimately it’s a war sleepless nature will win. Like that old Rolling Stones’ song, time is on nature’s side. And that makes me confident the day is coming when I’ll photograph an old lawnmower overtaken by its enemy, grass. Proof positive that we’re just passing through.