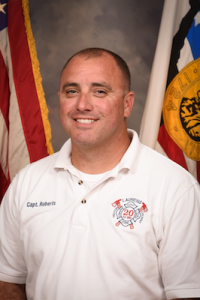 Mayor Nathan Senn announced today (Monday, June 27, 2022) the appointment of Neil Roberts as the next Chief of the City of Laurens Fire Department.

Roberts will officially take over as Fire Chief upon the retirement of Chief Bill Hughes on June 30.

Roberts is a seasoned firefighter and leader, having served with the Laurens Fire Department for nearly twenty years since January 2003. He assumes his new role having most recently served as a Captain.

“Neil Roberts has all the qualities one could look for in a great fire chief,” said Mayor Senn. “I am confident Chief Roberts has what it takes to effectively, successfully lead the City of Laurens Fire Department as it begins a new chapter in its long history.”

“I am honored to have been appointed as Laurens’ next Fire Chief, and I feel truly blessed to serve this city,” said Chief Roberts. “I will do all that I can to protect the lives and homes of our community members and support the firefighters who serve them.”

“Neil is a visionary leader,” said Mayor Senn. “I have been thoroughly impressed with his plans to further improve our Fire Department, which already boasts an ISO-1 rating thanks to the efforts of Chief Bill Hughes. When Chief Hughes informed me that he was planning to retire after serving the City more than 37 years, I was immediately conscious of the enormity of the challenge in finding his successor. I felt that it was in the best interests of the City for us to have an open hiring process, looking both internally and externally to find the best possible leader for our firefighters. And, ultimately, I believe that’s exactly what we did. We just happen to be fortunate that he was already serving our city.”

“Successful fire chiefs have to balance so many priorities,” said Laurens City Administrator, Eric Delgado. “They have to be concerned for the safety of the community and the lives of their firefighters. But they must also be skilled strategists to maintain and improve firefighter and equipment performance at a high level, working within a limited budget and the challenges that confront all fire departments. We believe Chief Roberts has the right strategies, skills, education, and priorities to take the City of Laurens Fire Department to the next level.”

“His strong work-ethic, can-do attitude, and experience building relationships within the city and community will be invaluable as he takes on the role of Chief,” added Delgado. “He already has plans to bring new firefighters to the City, but also plans to work with Laurens County and the other municipalities in our area to improve the quality of service to our citizens.”

A graduate of Laurens District 55 High School (1999) and Greenville Technical College (2001), Roberts spent the early years of his career in the fire service as a Firefighter, Engineer, and, most recently, Captain. In addition to faithfully performing the duties of each of those roles, Roberts sought out training and experience which would prepare him for leadership roles in the fire service. He has served as an instructor for the South Carolina Fire Academy since 2008. He has also worked as a training officer and firefighter with the Laurens County Fire Department and as a field service technician with M & M Fire Apparatus, a company which repairs fire service equipment and fire trucks across the Upstate and Midlands.

“My own father was a firefighter with the City of Laurens, and I was raised to have a deep appreciation for those who work in the fire service,” said Mayor Senn. “So, I knew I wanted our next chief to understand the importance of making sure there are kids in this town who look up to firefighters and who want to be one themselves ‘when they grow up.’ I was also looking for a chief who will take good care of not only our firefighting equipment, but the fire fighters who use it. I believe that Neil Roberts shares these priorities and will continue to earn the loyalty and respect of those he now leads.”

“As Fire Chief, I will prioritize innovation and pursue opportunities to improve the safety of our community and services of our department,” said Chief Roberts. “But, beyond the basic functions of our Fire Department, I am committed to building strong morale among our firefighters, creating a positive working environment for them, and promoting the development and sustainability of our department.”