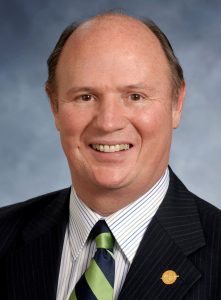 Senator Thomas Alexander and the intersection of life and work

AS A BOY GROWING UP in the thriving northwest corner of South Carolina, State Senator Thomas Cleveland Alexander always knew he would one day go into business – not politics necessarily – but the simple joy of daily industry. “I literally wanted to be a businessman when I grew up,” says Alexander. “My parents and the other working adults I was always around sort of instilled in me that love of hard work; of creativity and competition, and a keen interest in finance.”

That lifelong love of business easily transitioned into Alexander’s equal love of service in the S.C. General Assembly since first being elected to the S.C. House of Representatives in 1986, followed by a seat in the S.C. Senate in 1994. Even his current legislative committee assignments are all about business: Banking and Insurance; Ethics; Finance; Interstate Cooperation; Labor, Commerce and Industry (of which he serves as chairman); and Medical Affairs.

“Everything in the state Senate is done by seniority,” says Alexander. “So as the opportunities to serve on these committees became available I chose to serve on them. And yes, there are a lot of parallels and commonality between the various committees. When we look at Medical Affairs, for instance, a lot of the professions within the broader profession of medicine are operated as businesses.”

Alexander says he heartily embraces all of his committee assignments, always has, and during an interview in early Jan. 2021, he was quick to point to the Labor, Commerce and Industry Committee as being a key entity in terms of protecting and advancing the Palmetto State’s thriving economic development. “And it is thriving,” he says, despite the situational obstacles – the COVID pandemic, increasing political division, and economic downturns elsewhere in the world that now seem so ever-present.

“Finance is another important committee that I particularly enjoy because one of our charges each-and-every year, regardless of what else we deal with, is providing a budget for the citizens of the state of South Carolina,” he adds.

Alexander, who today owns Alexander’s Office Supply which serves businesses across the Upstate and beyond, is one of five children born to the late Virginia Cleveland (hence his middle name) and Claude N. Alexander.

A Clemson graduate, husband, father of three children and grandfather to 13; Alexander began his political career in 1982 when – like his father – he was elected to the Walhalla City Council. In 1985 he became Mayor Pro Tempore. A year later he was elected to the S.C. House of Representatives.

As a boy, Alexander played recreation (youth league) football. He also attended Clemson football and basketball games with his father, and he went to Sunday school and church where he participated in Walhalla Presbyterian Church’s various youth programs. It was also at Walhalla Presbyterian where, as an adult leader, Alexander was ordained a deacon and later an elder.

“Going to church and having that fellowship with believers has always played such a vital role in my life,” says Alexander. “It’s been for me like an extended family or a second family. I’m so grateful to the Lord for all things. My faith is so important to me. I try to be a servant of the Lord, and I take great comfort in knowing that the Lord is in control of all things.”

At church, Alexander has taught Sunday School and served as Sunday School superintendent. Beyond church, work, and the Senate, he has served on numerous boards including the Walhalla Chamber of Commerce, the Walhalla Downtown Association, and Carolina Office Products Association. He currently serves on the board of the Blue Ridge Bank. He also served terms as president of both the Walhalla Lions Club (where he was once named Lion of the Year) and the Walhalla Sertoma Club.

“It all has to do with how we best serve others and build our communities,” says Alexander.

Service and building are altruistically necessary to be sure, but they are also a means to an end. As Alexander explains, when an individual strives to lift another up, that individual in their seemingly small way is “strengthening the fabric of their, your, and our communities in which we all live,” enabling those communities to thrive and to weather any and all unforeseen storms. And storms are inevitable.

“Still while there always will be storms and challenges, I’m encouraged,” he says. “I think as a state we were well-placed prior to the pandemic. Our economy was going great. There was unprecedented low unemployment. Diversified industries. Strong sectors. Strong tourism. Strong agricultural.”

As to current storms, economic and otherwise, Alexander says, “We’ll weather them all, and we’ll come out better on the other side. Remember, we’ve had economic turbulence before: I’m thinking now about 2001 after the terrorist attacks of 9/11, then the years 2008 and 2012. Since I’ve been in the General Assembly we’ve had several economic downturns, but we’ve learned and grown stronger after the fact. This speaks to the resiliency of our citizens.”

Alexander adds, “Our citizens love this state and our communities. They’re involved in their communities. They’re dedicated. They have a great work ethic. The business and manufacturing communities recognize this, and this is why companies locate, relocate and make major expansions here. The friendly business climate here cannot be overstated.”

Nor can the fact that South Carolina is a military friendly state.

“I think that goes back to the beginnings of our history in this state since before the American Revolution,” says Alexander. “Our citizens are extremely patriotic. We are proud of our men and women in uniform, and we love our military veterans.”

Alexander also points to the fact that so many retired military veterans – after having passed through or been stationed at one or more of our state’s military bases – choose to retire in South Carolina for all of the aforementioned reasons.

“They are a tremendous resource as well from a business and industry standpoint, because so many of these military retirees and veterans bring with them a unique work ethic and industry expertise that can transfer into the civilian private sector,” he says. “We all benefit from that.”

What about the immediate future of the Palmetto State and the things Alexander sees as priority challenges going forward? At the top of the list is broadband deployment statewide.

According to an article, ‘Broadband: South Carolina’s Digital Divide’ (Nov. 16, 2020), published by SCETV, “despite the drastic technological advances of the Information Age, 19-million people throughout [the U.S.] still lack access to the Federal Communication Commission’s standard for reliable Internet. In South Carolina, 344,000 people do not have access to this standard, and 171,000 people do not have access to a wired connection at all… Without quality internet; education, healthcare, and employment become much more difficult to obtain.”

Broadband is critical, now more so than ever in the wake of the pandemic with increased in-home online schooling.

Alexander says broadband deployment has become part of our critical infrastructure. “It’s a necessity today like electricity, clean water, that kind of thing,” he says. “We were already pushing for this prior to the pandemic, but the pandemic revealed just how critical online services are and how so many are still without. We need to have this fully deployed statewide within the next three years or sooner.”

He adds, “Legislation in 2020 really enabled broadband developers to expedite the work they need to do in order to ensure that we have reliable internet service in every household across this state. We still have a lot of work to do on this, but I’m encouraged by the direction we’ve taken on this.”

Alexander says that “whenever we’ve recognized a legitimate need in our state – no matter how daunting – our citizens have always stepped up to find a way.” He points to Gov. Henry McMaster’s 2018 establishment of the S.C. Floodwater Commission following several disastrous flood events stemming from storms since 2015.

“This commission, unique to the Palmetto State and chaired by my good friend of 33 years, retired Maj. Gen. Tom Mullikin, is nothing short of visionary,” says Alexander. “It is a means by which both Tom and the Governor have gathered the best and the brightest – engineers, business and military leaders and other thought-leaders – from across our state to form this unique body of 10 specially tasked committees (what the Commission refers to as task forces) which in their planning and brainstorming may well reveal to us previously unimagined ways to mitigate disastrous flooding to our state going forward.”

Alexander says that new legislation to be advanced, like full-statewide broadband development and ideas set forward like the S.C. Floodwater Commission, are solutions to challenges that are unique to the Palmetto State. The challenges themselves certainly aren’t unique. But the solutions introduced and the ongoing inroads made toward achieving those solutions are.

“The Floodwater Commission was overdue,” he says. “But the Governor couldn’t have selected a better chairman and leader for the commission and the work that’s being done in the way that he [Mullikin] can galvanize and build partnerships.”

Building partnerships is also that which Alexander says, “reflects the uniqueness and the way we are so blessed here in South Carolina. We bring people together. We unite others. We focus on the absolute goodness of people. This is not a throwaway feel-good statement. Goodness in people is a substantive objective fact.”

Speaking of goodness, Mullikin says “goodness” in the pure sense is one of Alexander’s defining qualities.

“I think most people see Thomas as a legislator whose strong pro-economic development positions and his striving to generate and bring new business and industry to our state are the things that define him: And they do,” says Mullikin. “But what best, perhaps more-fully describes Thomas is his innate goodness, his sincere love for and appreciation of others which we see in the often-unsung things he does for people. His unheralded constituent services. His behind the scenes kindnesses toward others that he always does – and has for years – without any expectation of reciprocal gain. It’s really never about him. That and his sense of ethics. His integrity is simply unassailable, which in the current political climate is a breath of fresh air.”

So it all comes back to service and the fuel that drives that service. For Sen. Thomas Alexander that fuel is simply caring.

[This story was published in the Spring 2021 edition of THE SOUTHERN EDGE magazine. Photo courtesy of the S.C. Senate.]