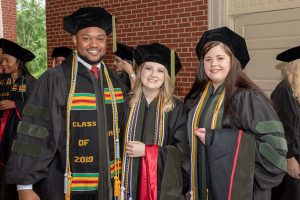 Sixty-six of 68 PC School of Pharmacy students passed the pharmacists’ licensure exam on their first attempt when they took it this past spring. This first-time pass rate of 97.06% is more than 6% higher than the national average of 90.59%.

Dr. Cliff Fuhrman, professor at the PC School of Pharmacy, credits the curriculum, the faculty and preceptors, and the students for the high pass rate.

“(Our curriculum) has extensive learning in various areas of therapeutics, calculations and drug names and usages,” Fuhrman said. “I believe the combination of the curriculum and our faculty and preceptors providing excellent teaching and application skills contributed to these results.”

The PC School of Pharmacy graduates’ average test score for the licensure exam, called the NAPLEX, was higher than the score from graduates at other pharmacy schools across the nation too.

NAPLEX scores can range from 1 to 150. On average, PC students scored a 101.16. On average, students at other pharmacy schools across the country scored 96.80.