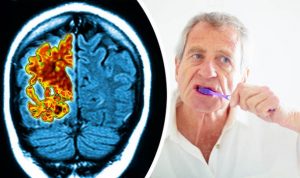 Good oral hygiene has always been important but new findings suggest even more reasons to amp up your oral hygiene routine.

What is Periodontal Disease?

Periodontal disease (PD) is defined as serious inflammation of the gums due to infection from bacteria which can cause pocketing between teeth and bone loss. This chronic and systemic inflammation in the mouth can cause inflammation all over the body. As we continue to study PD, we are seeing more connections between oral health issues and other chronic diseases.

When there is severe PD in the mouth, the body needs to respond to the unwanted bacteria with inflammation.

What is Alzheimer’s Disease?

Alzheimer’s disease has two distinct proteins in the brain:

Amyloid beta – Sticky proteins that can clump together, forming plaque. This plaque can disrupt brain cells causing the inability to communicate and eventually killing those brain cells. It is believed to be the first protein we see in brains developing Alzheimer’s.

Tau – Proteins found in neurons that are important in stabilizing microtubules in order to help transport nutrients between nerve cells. In the brains of patients with Alzheimer’s disease, the tau proteins are abnormally shaped and therefore prevent normal function of brain cells. In Alzheimer’s, neurofibrillary tangles contain these abnormal tau and cause an accumulation of tau. As more tau accumulates in an Alzheimer’s brain, the more severe the disease becomes.

Alzheimer’s disease continues to be studied as we still do not understand the full scope of the disease. As of right now, most studies have shown that changes in amyloid beta protein amounts are seen much earlier before any indication of tau protein change or even the symptoms of Alzheimer’s disease are detected.

How are these linked?

A new study, from NYU College of Dentistry and Weill Cornell Medicine, was published on April 12, 2021 that examined the link between harmful bacteria found in periodontal disease and amyloid beta protein (https://doi.org/10.1002/dad2.12172). The study consisted of 48 healthy physically and cognitively normal adults at ages 65 and up. The participants had bacterial samples collected from beneath the gum line in the mouth.  These samples were then analyzed for the harmful and helpful bacteria. Additionally, a lumbar puncture was done in order to obtain cerebrospinal fluid (CSF) from each participant. The CSF was analyzed for the amount of amyloid beta and tau.

The results concluded that an individual with an imbalance of bacteria, in which there is more harmful than helpful bacteria, was more likely to have Alzheimer’s. It was also hypothesized that having a good balance of good bacteria in the mouth can help in protecting against Alzheimer’s. This is an exciting potential link and another great reason to keep your teeth and gums healthy!

Clinton Dental Care is a full-service comprehensive health dental office located in Clinton, South Carolina. Services provided include hygiene, restorative, crown and bridge, esthetics, and sleep medicine, and more. We have been serving Laurens County and surrounding areas since 1977.