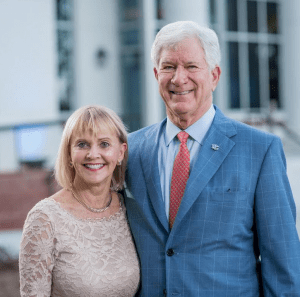 Five years after taking the reins at Presbyterian College, Robert (Bob) Emmett Staton has announced his plans to retire on December 31, 2020.

“It has been one of the greatest privileges of my life to serve my alma mater as a trustee, as a member of its staff, and since 2015 as its President, for I know how important realizing the promise of PC is in shaping students like me to live meaningful lives,” Staton wrote in an email to PC students, faculty and staff.

During his tenure as PC’s president, Staton introduced the strategic plan, “The Promise of PC.” The plan included new initiatives to foster strategic growth, student success, valuing others, and sharing the PC story.

The goals of the strategic plan are realized in the renovation of Neville Hall, the building of a new undergraduate residence complex and the renovation of numerous other campus buildings. Guided by “The Promise of PC,” the College has welcomed its most diverse classes over the last two years.

“Bob has been an exceptionally strong and effective leader,” E. G. Lassiter, chairman of PC’s Board of Trustees, noted in an email to the PC community.

“PC’s motto–while we live, we serve–resonates profoundly with (wife Phyllis and me),” Staton said in the email. “We are grateful beyond words for the time we have shared with you as we’ve worked together to realize PC’s promise for students now and in years to come.”

Staton has been instrumental in guiding PC through the coronavirus pandemic since early March. The College has adjusted its academic schedule, like most colleges and universities have done, while remaining true to its mission, according to Staton.

“Delivering on that mission, and realizing the promise Presbyterian College holds, is even more crucial than ever in a time of great change and enormous uncertainty,” Staton said.

“The challenges posed by the COVID-19 outbreak and resulting global economic downturn require us to be receptive to change, new ideas, and different ways of doing things.

“At the same time, though, we must never lose sight of what makes this place so special: the promise it holds for taking students of all ages and backgrounds and preparing them for meaningful contributions to a world that needs them more than ever before.”

Staton, a 1968 graduate of PC, earned a J.D. from the University of South Carolina School of Law. He went on to become the chairman and CEO of Colonial Life before his retirement from that field. He currently serves on the board of Delta Apparel, a publicly traded company with executive offices in Greenville, S.C.

Committed to the success of the people of South Carolina, Staton is a member of numerous state and local civic organizations. He has been recognized by the South Carolina State Chamber of Commerce as Business Leader of the Year and was awarded the Order of the Palmetto by Governor Jim Hodges.

Staton’s involvement with the College spans five decades. He served as a member of the Board of Trustees from 1997 to 2006. He also served as chair of the College’s Promise and Challenge capital campaign. In January 2007, he joined the College’s administration as executive vice president for external relations until 2012. Staton received an honorary doctorate of public service degree from PC in 2015.

The Board of Trustees has appointed Trustee Holbrook Raynal, M.D., a 1970 PC alumnus, as Chair of the Presidential Search Committee. Dr. Raynal will constitute a search committee in the next few weeks and launch and conduct a national search for PC’s 19th President.