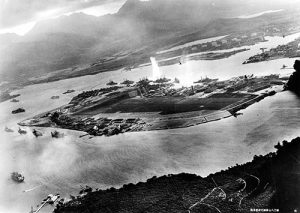 This year, we will “Remember Pearl Harbor” three days earlier than usual.

On Saturday, Dec. 4, the South Carolina Confederate Relic Room and Military Museum will mark the 80th anniversary of what President Franklin D. Roosevelt called the “date which will live in infamy” – Dec. 7, 1941. It was the day that changed everything, and shaped the world we live in now.

To those old enough to remember – and even to many born much later – the fact that so many years have passed may be almost as much of a shock as the Japanese surprise attack itself was. But the commemoration at the Relic Room will make the memory fresh even to the youngest of visitors.

It all starts at 10 a.m. at the museum, located at 301 Gervais St. in Columbia. Here’s the schedule as it stands at this point:

10:30 – Opening Ceremony and Tactical Map Reading/Land Navigation with Benjamin Battiste, curator of history at the museum. This covers vital skills that will likely seem especially mysterious to those who have grown up with phones with GPS.

11:30 – Military Vehicles of WWII. We celebrate the men and the weapons that won the war, but neither could have gotten to the front at all without American’s phenomenal ability to mass-produce military vehicles and the fuel to run them on.

12:00 – Flying Tigers and the Citadel with Joe Long, curator of education at the museum. Learn of the exploits of the First American Volunteer Group, led by the legendary Claire Lee Chennault. They were easily among the first to fight, arriving in China in April 1941, and engaging in combat only 12 days after the Pearl Harbor attack.

12:30 – U.S. Coast Guard at Pearl Harbor with Kenneth Robison. We all know the story of how the Navy fought back during the attack, but the Coast Guard also played an active role in the battle.

1:00 – Code Breaking in WWII with Brian Sharp. Most of America knew little about the secret weapon that would do as much as anything to bring our country back from the disaster of Pearl Harbor: the U.S. Navy’s ability to read Japan’s most secret naval communications.

2:00 – Tactical Mine Clearing with Nick Galvan and a South Carolina Sailor, Anderson Corder. Submarines weren’t the only hazard to warships that lurked beneath the waves.

2:30 – General Patch and Camp Croft with Tom Dunbar. Nearly a quarter of a million troops would receive basic training during the war at this Upstate facility.

Scheduled activities end at 3 p.m., but all through the five hours of the event, the following displays and demonstrations will be happening in the atrium: