The Museum Came to Us

Any other year, I would have taken the kids on a field trip to the museum. In 2020, the museum had to come to us. My children got a history lesson 2020 style, and it was one of the best ever. Corona has forced us to re-think how we do everything, and that’s not necessarily bad. No need to load onto a bus or get permission slips signed this year. I just needed a curator willing to make a quick video. That’s just what Meredith Nichter with the SC State Museum did.

From the safety of our classroom, where we sat three feet apart and wore our masks, my kids learned about a steel girder from the world trade tower. Nichter shared several 911 SC connections. For example, one of the antennas on top of the world trade tower was made with materials from Columbia’s own Kline Steel. Nichter also told the students about a man who was not on planet Earth the day of the bombings. South Carolinian and former astronaut Frank Culbertson was on a mission with two Russian cosmonauts on September 11. He had a unique perspective as he took photos and videos of the smoke pouring from the twin towers. 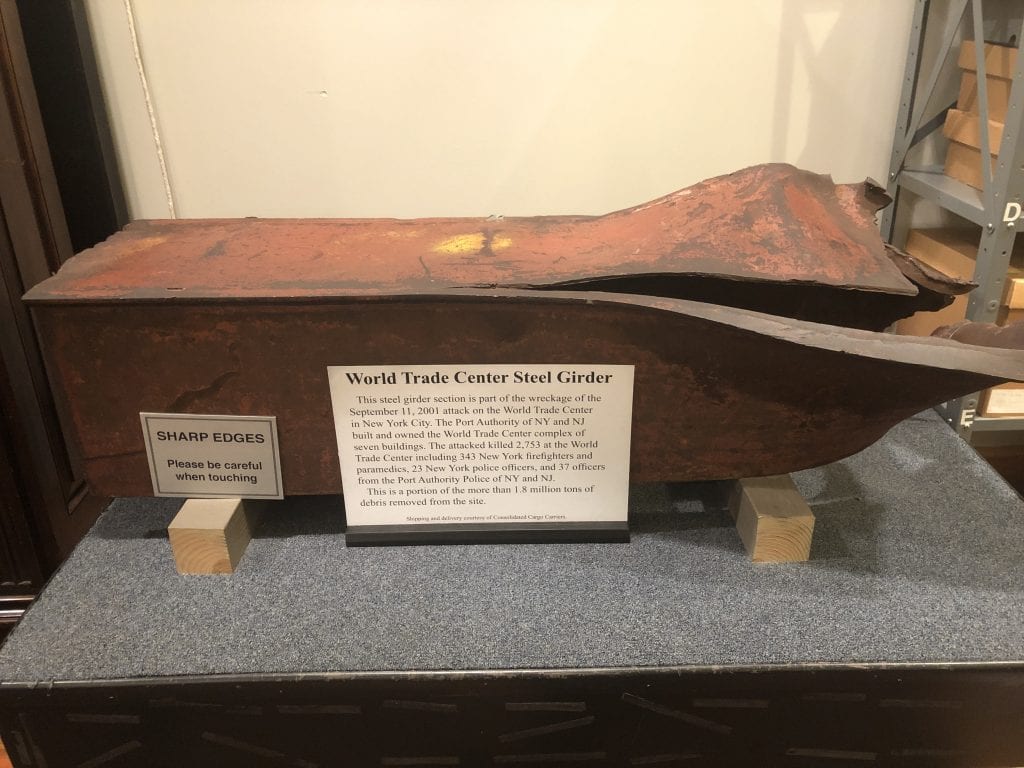 My colleague had the idea to have students interview someone about September 11 memories. Most of my fifth graders made videos.  The stories were amazing:

One dad told of being in Las Vegas with friends. Since all flights were cancelled, they purchased a car and drove home to SC.

One mom, attending college in Washington, DC, looked out her dorm room to see smoke rising from the Pentagon.

Many students shared military connections. One mom was a freshman at the Naval academy. Several fathers and uncles and grandfathers were deployed to the Middle East as a result of 911.

One mother who was teaching music at the time told how she came up with a playlist of songs to help her students get through that scary, challenging time.

One family friend was actually under New York City, riding in a subway, as the attacks happened above.

The stories from 2001 highlighted many changes over the last almost twenty years. The concept of a hall phone in a dorm was lost on my students. They were shocked and horrified to learn that in the olden days a group of college students shared one community phone.

I saw looks of confusion as a dad told that he initially heard about the attacks while riding in a taxi in San Francisco. Very few of my students have ever ridden in a taxi. Some didn’t even know what one was, but they all knew about Uber.

The kids didn’t understand why almost every single person mentioned huddling around a television. Our methods of gathering news have certainly changed in 19 years. One student brought in a September 12, 2001, copy of The State newspaper. The children were fascinated and asked if they could pass it around.

I watched or read 67 interviews on September 11, 2020. Locations changed, but most told the same story. Initial reaction? Shock and confusion, followed by fear and sometimes anger. By September 12, almost every person interviewed mentioned national pride and told how the community came together. Most stories included a reference to some act of heroism. This time, nineteen years ago, most citizens were proud to be Americans.

Many people mentioned watching Bush’s reaction when he heard about the attacks while reading at an elementary school. Several people praised the speech he gave at ground zero. Several families complimented Obama on his speech announcing the capture and death of Bin Laden. Nineteen years ago, we enjoyed a kinder, gentler political atmosphere for sure.

I’ve been teaching for more than 30 years, and this might have been my best “remember 911” lesson. Until this year, I had never heard of a hybrid classroom. In 2020, I live it every day. On Friday, September 11, 20020, I had some kids sitting together in my classroom and some zooming in from home, but we are all able to share our 911 stories together, as a class.

I told my students one day their children or grandchildren might interview them about their corona experiences. The next generation will want to know what it was like to be a kid in a pandemic. I hope they will remember watching these 911 videos. I hope they put much thought and care into their answers. I think they will.