He didn’t like to fly, but he traveled the world, missing the South always. When he was in some country afar and by chance heard a Georgian’s accent it pierced his heart. He was a Southerner and he wrote a book that became a Southern classic, Red Hills and Cotton: An Upcountry Memory. His name is Ben Robertson and he came into this world June 22, 1903, in Clemson, South Carolina.

The University of South Carolina Press just released Ben Robertson—South Carolina Journalist and Author by Jodie Peeler, a journalism professor at Newberry College. Peeler hails from Greenwood County, and her book reminds us that Ben Robertson was a great friend of legendary broadcast journalist Edward R. Murrow, a North Carolinian. In her book, Peeler writes about Robertson’s “1942 hymn to his boyhood on his grandparent’s farm in the South Carolina upcountry, a tribute that doubtless resonated with Murrow’s roots in rural North Carolina.” 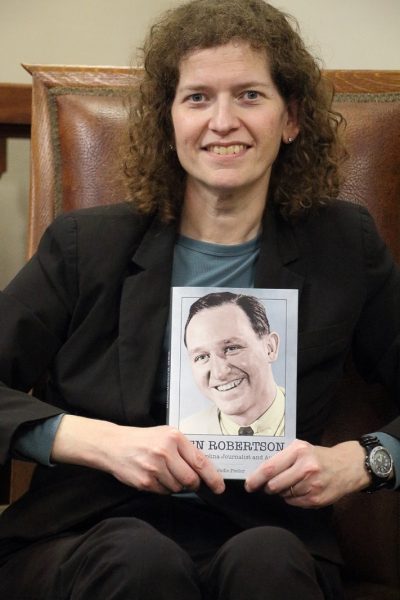 In 1940, Murrow was early into his reporting for CBS when he befriended Robertson who was covering Britain’s wartime struggles for the New York daily newspaper, PM. “Together, they covered battles, faced danger, saw the horrors of war, and witnessed the invincible spirit of the British people.” Both men had left their hometowns to “see the world and do great things.” They viewed journalism in a similar way, each using small details to tell a much bigger story.

I remember seeing Edward R. Murrow on my parents’ small black-and-white TV. I was just a boy but even then I knew this was a man of magnitude. So was Ben Robertson, though his photographs reveal a boyish demeanor. Boyish or not, Robertson had the courage to write a book, Travelers’ Rest, a fictionalized family story that ruffled some feathers with its scenes of sex and violence. It echoed the message found in his better-known Red Hills and Cotton. He wished the South to move on from its past. Robertson also wrote I Saw England, his eyewitness account of the Battle of Britain. 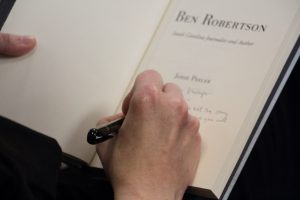 You know that old cliché, the good die young? Well, Yeats put it another way when he wrote of Major Robert Gregory, “What made us dream that he could comb grey hair?” Yes, what made folks think a daring journalist would live a long life.

Benjamin Franklin Robertson Jr. departed this world February 22, 1943 in Lisbon, Portugal. The day before he had boarded a Pan Am Boeing 314 flying boat referred to as clippers, a tribute to the fast sailing ships. Eleanor Roosevelt had christened this particular craft Yankee Clipper. Just before landing something went wrong and Yankee Clipper slammed into the Tagus River at 130 miles an hour. There were survivors, some of whom swam ashore but Robertson was not among them. Nor was he among bodies found in the wreckage.

Early March. Bodies wash ashore on the Tagus. Not Robertson’s. Around March 13 a man’s body is found thirty miles from the crash site. A heavy silver bracelet reveals it is Ben Robertson. Cause of death? Drowning. An intrepid journalist, never married, was no more. Of Robertson, Edward R. Murrow wrote, “He is out of war and into peace.”

The Charleston Post and Courier reviewed Peeler’s book, saying a “thoughtful biography is what Ben Robertson deserved.” I agree. I had the pleasure of attending Jodie’s thoughtful presentation on Ben Robertson in Edgefield January 12, and I have the pleasure of reading her book. It’s a good one and I know that Robertson would be pleased, and I am sure you will too, for there’s much depth and breadth to this 224-page biography.