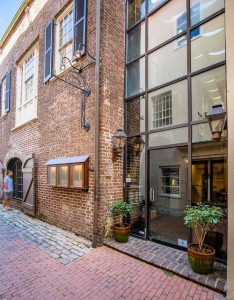 When Sprock first considered 155 East Bay and 2 Unity Alley, he thought the 12,000-square-foot space would be too big for his style of restaurants. He even considered buying the property and then turning it over to someone interested in creating a high-end restaurant. When that idea didn’t get traction, Sprock said he decided to revive two classic Atlanta brands into a new Charleston restaurant concept.

Sprock is opening Clarence Foster’s Cookery & Saloon, an iconic Peachtree restaurant that will mark its 50th anniversary next year. The idea, Sprock explained, is to fill a void in downtown Charleston – incredible food at an affordable price point.

“We’re really going to have some fun with it,” said Sprock, who divides his time between South Florida and Charleston. “It will be your go-to place once or twice a week. Our tagline is ‘Don’t you people have homes!’”

Clarence Foster’s will occupy the former McCrady’s restaurant with the same entrance on Unity Alley. Sprock said he plans to keep the bones of the building the same but with updates and fresh artwork.

For the upstairs space – known as the Long Room – Sprock is bringing back another Atlanta icon, the Chameleon Club. A bar and music venue, it hosted the likes of Hootie & the Blowfish and The Black Crowes. For this iteration, Sprock is aiming for something a little more laid back with a fun lounge vibe. The space where George Washington dined will welcome a slightly older crowd for cocktails, bites and music.

Plans are to open both Clarence Foster’s and the Chameleon Club in early 2022.

Just up the street at 153 East Bay St. another restaurant is making its location a permanent home. Jerry Scheer and Mark Cumins of Homegrown Hospitality Group purchased the property for more than $2 million. The location has been home to their oyster bar Pearlz for the last decade. When the option to buy the space came up, Scheer said they were really excited.

The property comes with additional space, which Scheer said they are determining how best to use.

Charleston Commercial, a key player in the local commercial real estate market, recently brokered several other deals on King Street, including a group of three King Street retail properties as well as the sale of 438 King St. to Miami-based restaurant Le Chick for almost $6 million.

The Charleston Commercial team is skilled at handling both high-profile and complex deals in the heart of downtown Charleston and around the region.

“We’re thrilled to help facilitate a fresh, new restaurant concept in an iconic downtown space. Breathing new life into historic buildings is what Charleston is all about,” said Joshua Schaap, managing partner of Charleston Commercial. “It’s also rewarding to see a long-time restaurant like Pearlz transition into ownership. Once again, we’re seeing just how vibrant Charleston’s downtown dining scene is.”

In 2020, Charleston Commercial also brokered the sale of the former R.B.’s Seafood Restaurant on Shem Creek for $7 million. And in the last several years, the firm brokered or participated in 19 property acquisitions in downtown Charleston, totaling more than $74 million.