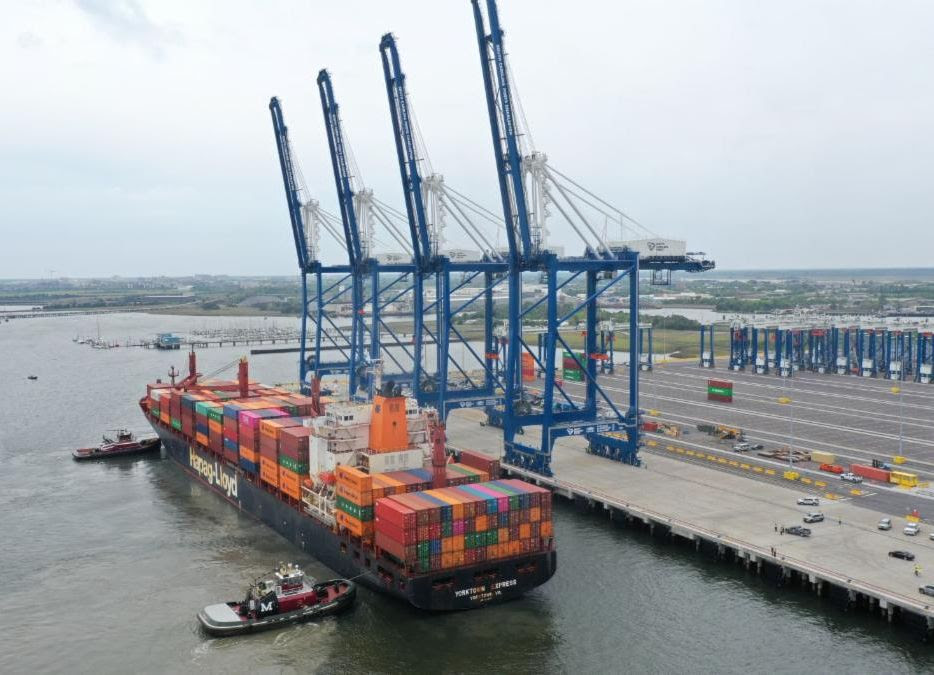 SC Ports had a historic day as it welcomed the first vessel, the Yorktown Express, to the Hugh K. Leatherman Terminal in North Charleston, S.C. (Photo/SC Ports/Walter Lagarenne)

South Carolina Ports made history welcoming the first vessel to the Hugh K. Leatherman Terminal, marking the first container terminal to open in the U.S. since 2009.

Operations launched March 30 with the arrival of the first container, followed by the first ship arrival with Hapag Lloyd’s Yorktown Express.

“The Hugh K. Leatherman Terminal is an investment in the future of South Carolina that will spur economic development, create jobs, and further our state’s position as an international business destination for years to come,” Governor Henry McMaster said. “This project is a momentous achievement which highlights the strengths of Team South Carolina.”

The Leatherman Terminal, which has been 20 years in the making, is a generational milestone for SC Ports and for South Carolina. The terminal sits along the Cooper River in North Charleston, S.C., near Charleston Harbor. Its cranes can be seen throughout the region — the changed skyline serving as a reminder of Charleston’s success as a port city.

The Leatherman Terminal can efficiently work the biggest ships calling on East Coast ports. Phase One adds 700,000 TEUs of throughput capacity to the Port of Charleston.

SC Ports CEO Jim Newsome said that the opening of the terminal comes at just the right time, as U.S. container ports continue to handle unprecedented cargo volumes amid strong consumer demand. SC Ports had an all-time cargo record in March, with a 50% year-over-year increase in loaded imports.

“This took years of effort by our team and project partners,” Newsome said. “We have invested in the right infrastructure at the right time to handle growing cargo volumes and bigger ships, ensuring SC Ports remains a top 10 U.S. container port. The Leatherman Terminal adds a berth and more capacity to the Port of Charleston when it is most needed on the East Coast.”

Its 1,400-foot berth can handle a 20,000-TEU vessel. Five electric ship-to-shore cranes with 169 feet of lift height and 228 feet of outreach stand on the berth, ready to move cargo on and off container ships. These cranes are among the tallest on the East Coast.

SC Ports filed permits in 2003 to develop a container terminal on the south end of the former Navy Base in North Charleston, S.C. Permit approvals were received in 2007. Site work began in 2007 and continued through 2018; work included demolishing old buildings and preparing the former Navy Base site to handle port operations.

Site preparation was extensive, involving driving more than 6,300 miles of wick drains into the site to draw out water, and barging 6 million yards of sand and crushed rock to the site for fill material — yielding a flat, even surface on which to build the terminal.

Site development and construction kicked off in 2018. Building the terminal was like building a small city. The site needed a complete road system, electricity, utilities and buildings. An expansive container yard and wharf had to be built, and the arrival, testing and commissioning of 30 cranes had to be coordinated.

Meanwhile, the S.C. Department of Transportation built the Port Access Road to provide motor carriers a direct connection between Interstate 26 and the Leatherman Terminal.

This all required great collaboration, with hundreds of people from every engineering discipline working together on the site every day. The project was finished on time and under budget. Nearly 80% of the dollars spent on construction contracts were awarded to S.C.-based firms.

The $1 billion investment to build Phase One is among the state’s biggest and most significant economic development projects to date. Its impact will be felt by waterfront workers and S.C. businesses for decades to come.

The Leatherman Terminal greatly enhances South Carolina’s supply chain, and a well-run port with capacity is an attractive asset for companies.

The Charleston Harbor Deepening Project is on track to achieve 52 feet of depth this year, making it the deepest harbor on the East Coast. SC Ports also looks to develop near-dock rail capabilities with the future Navy Base Intermodal Facility, located about a mile from the Leatherman Terminal, and an inner-harbor barge system.

“South Carolina’s successful supply chain is a direct result of the strategic investments made in port infrastructure that allows us to handle bigger ships and more cargo,” SC Ports Board Chairman Bill Stern said. “The opening of the Leatherman Terminal is a hugely significant milestone for SC Ports and for South Carolina as a whole, setting us up for continued success.”