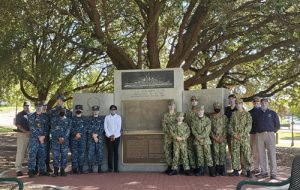 Who were those masked young people at Memorial Park in Columbia recently, and what were they doing?

Those were members of the Columbia (CL-56) Palmetto Division of the Sea Cadets, carrying out their voluntary duty. They were replacing the jack – the flag – on the actual jackstaff of the storied cruiser, USS Columbia. The staff is on permanent display in the park.

The new jack was provided by members of the USS Columbia Association, made up of veterans who served on the ship in the Second World War and their family members.

Last year, Columbia veterans gathered here in the city for which their ship was named for what was billed as their last reunion. Five former shipmates, all in their 90s, showed up: Ed Jenkins of Nashville, Tenn.; Jack Weiss of Ft. Myers, Fla.; Harlow Thompson of Minneapolis, Minn.; Stanley Beckett of Penndel, Penn.; and George Henry of Atlanta.

They enjoyed it enough that they decided maybe it wouldn’t be the last time, and they would come back to Columbia this year, too.

But then came the coronavirus, and that didn’t happen. Instead, at about the same time such a reunion might have taken place, these young cadets raised the new flag sent to them by the association.

COVID has had an impact on the cadets as well. Over the summer, the national headquarters of the U.S. Naval Sea Cadet Corps canceled “in-person” training sessions – which for this group have often taken place at the South Carolina Confederate Relic Room and Military Museum – until further notice.

So while they’ve undergone virtual training under the direction of the museum’s curator of education, Joe Long, they’ve gathered in person less often. The flag-raising on Saturday, Oct. 24, was one of those special occasions, with cadets’ uniforms including face masks, some emblazoned with their unit crest.

The Relic Room not only has a close relationship with the cadets, but with the USS Columbia as well. The museum’s display include a number of records and artifacts recalling the ship’s combat career, including a detailed five-foot model of the ship built by a crew member, and the broken champagne bottle used to christen the ship soon after the Pearl Harbor attack.

The Columbia, called the “Gem of the Ocean,” would go on to distinguish herself in combat against Japan, serving with distinction in several Pacific campaigns and earning 10 battle stars.