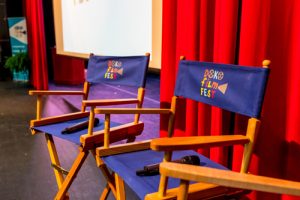 Success breeds success. And so it is that the second annual Doko Film Fest, to be held in Blythewood March 13 and 14, will be bigger and better than the inaugural event in 2019.

Entries for the competition for students aged 14 to 18 – 143 of them – flowed in from across the country (from 22 states), as well as from Canada, India, China and the United Kingdom. Last year’s festival was the first such event for high school-aged filmmakers to be held in South Carolina.

“I’m just amazed at how it’s grown,” said festival creator Ray Smith. “There’s a lot of excitement about it among young filmmakers out there, and I’m as excited as any of them. I know this will be another great event.”

The festival not only gives young film producers the chance to show their films to a live audience, but to attend master classes led by award-winning professional filmmakers, and have their work judged by industry professionals.

“It’s just something I never got to experience before,” said South Carolina native Luke Evans, who won top honors with the Best Film award at the inaugural event last year. “It was very awesome… being able to watch your film on the big screen,” said the senior from South Florence High School. “I met a lot of cool people,” he said, adding that it was “probably one of the best experiences of my life.”

This year’s participants submitted two-minute to 10-minute productions in six categories. The biggest category this year was Short Stories, with 82 entries, followed by Documentary and Comedy.

Here’s the schedule for the festival:

• Friday, March 13, 7 to 9:30 p.m. – “First Night” reception at Doko Manor, 100 Alvina Hagood Circle in Blythewood, featuring Blythewood’s own Michelle Eisenreich, a two-time Oscar winner for Visual Effects (“Blade Runner 2049” and “First Man”). There will be live music, as well as drinks and food provided free of charge, thanks to the support of sponsors. A silent auction will raise funds to support the festival going forward.

• Saturday, March 14, 8:30 a.m. to 5:30 p.m. – Screenings and workshops at Westwood High School, 180 Turkey Farm Road. You’ll be able to see the best-in-category films made entirely by high-schoolers from across the country and beyond. Throughout the day, there will be master classes taught by such pros as Eisenreich and Wally Marzano-Lesnevich, an actor, producer and screenwriter known for “Therapy, Bro” (2018), and “Almost Paris” (2016). We will also view a video of James Jude Courtney (Michael Myers of the “Halloween” series and Doko Film Fest supporter) talking about forging a career in the film industry.

• 5:30 p.m. – Awards Ceremony. The big payoff for participating filmmakers, and prizes are awarded in all categories: Short Story, Documentary, Music Video, Animation, Comedy and Pocket Studio (smart phone). All films will have been judged and selected by a panel of film professionals.

Tickets are available through the website, https://DokoFilmFest.com. Join us for this celebration of the talents of young filmmakers.

Doko Film Fest gives South Carolina high school-aged filmmakers a showcase for their visual storytelling. Its mission is to develop the skills, knowledge and confidence of young filmmakers and provide them an outlet for their creativity. The festival promotes South Carolina as a hub for young filmmaking talent and creates a network event that allows young artists to meet peers and professionals as they explore college-level courses in media arts. Doko Film Fest was created by business educator and documentary filmmaker Ray Smith. To learn more about participating, attending or becoming a sponsor – and to view some of the films – please visit https://DokoFilmFest.com.