I had a first-class guide through this rugged beautiful land, former teammate, No. 53, guard Eddie Drinkard, was again leading No. 13. In another century we battled opponents. Now we faced massive boulders, steep hills, and a spring-fed creek winding its way to Clarks Hill Lake.

This adventure began with words. When my column brings back memories, Eddie emails me. One column inspired him to draw a map of Lincolnton. With his map in hand, we met at the courthouse one afternoon and walked streets recalling places and people when we had darker hair. Recently, my column, “Highway 79, A Historic Route,” caught his eye and he invited me to tour the northern end of Lincoln County. Eddie also planned an excursion into Elbert County. 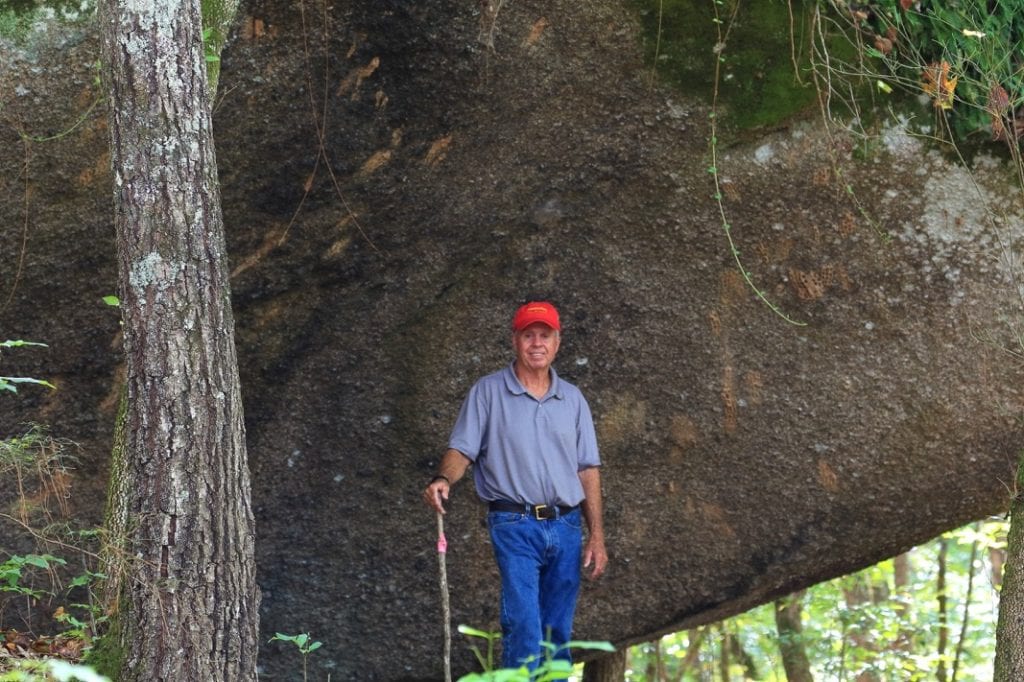 On a hot, humid September Sunday we drove to Elbert County’s Stephen Heard Cemetery where Revolutionary War patriots and Confederate soldiers rest within ancient rock walls. No wooden or vinyl fence can compare. More rocks. Less vinyl. And boulders. Give me boulders. Well, that’s exactly what Eddie would do but first we had a rendezvous with a man with a famous name.

At the cemetery we met none other than Dan Tucker, descendant of the legendary Dan. Driving up in a pickup Dan got out carrying a book, The Tucker Band. No, not the Marshall Tucker band, his family connections to the aforementioned legend, Dan Tucker. Ever since, there have been many Dan Tuckers and the Dan we met named his son … you guessed it, Dan Tucker.

A bluegrass and country music standard, “Old Dan Tucker” has a history as a minstrel song and the lyrics come in several versions. You probably know this beginning: “Old Dan Tucker was a fine old man/Washed his face with a fryin’ pan/Combed his hair with a wagon wheel/And died with a toothache in his heel.”

Heading to Lincoln County we peeled off Highway 79 onto Mallorysville-Lisbon Road. Flutters of yellow, cloudless sulphur butterflies migrating to Florida, crossed our path. Butterflies and boulders, it’s wild in this rolling land of Indian villages and drowned towns thanks to a man-made boulder downstream at Highway 221. Soon, Eddie would show me a massive boulder geologists call a pluton. Eddie calls it Shelter Rock.

The route to Shelter Rock meant a good walk on a scorching September afternoon but that didn’t matter. Eddie had towed in his Kawasaki Mule, red and black, of course, and we Georgia grads rode over the hilly, boulder-strewn terrain with ease. At the edge of Corps land, Eddie gave me a walking stick and we headed out through dense woods. After a substantial walk, I saw it. Spectral, it materialized through green leaves and gray trunks. Shelter Rock, festooned with ferns, stood in hardwoods on a hill.

When you first see it you fail to take in its size. It’s long and looks like a submarine that’s blown its ballast tank and lunged from the sea at a steep angle. A gentle shove you think will send it crashing downhill. But it’s solid, rock solid. Ain’t going nowhere.

No doubt Indians used it as a lookout across the Broad River. Surely they used it as a shelter too. If Shelter Rock could talk it’d tell you about Yuchi and Creek Indians, pioneers, log cabins, colonists, soldiers, and a strange time when the Broad River stalled and water crept higher and higher. It might even tell you about Dan Tucker who was too late to get his supper.

Well, we know this. Shelter Rock, rock of ages, still stands—above ground and above water—but all before it is gone or changed forever. When we are long gone, when our walking sticks have rotted, and the Kawasaki mule rests under a shed, Shelter Rock will keep on keeping on, a destination someday for others’ Sunday afternoons. The rock will add them to its long, long memory.