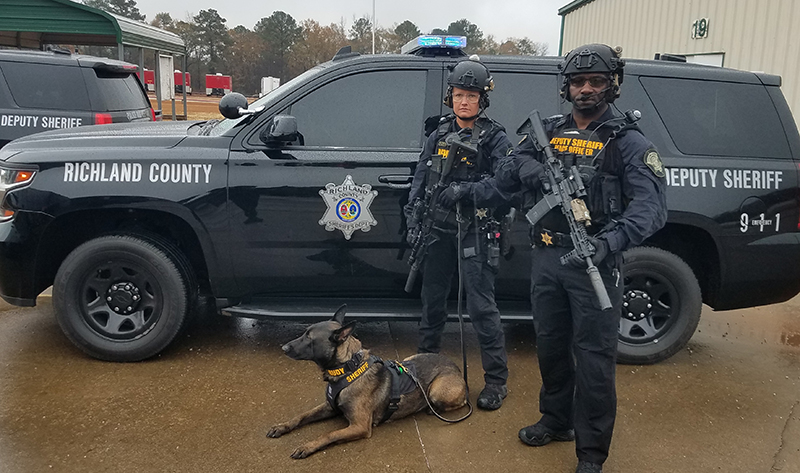 As 2022 is surely poised to bring about new – and to crystalize existing – challenges for law enforcement agencies, nationwide; law-enforcement tactical teams (SWAT teams) like the Richland County Sheriff’s Department’s (RCSD) Special Response Team feel the exigency of one particular challenge perhaps more keenly than others: The challenge of situational de-escalation vs escalation of force.

“The pressing, primary challenge we have right now is training, maintaining and fielding a highly trained tactical team that has a heavy focus on de-escalation,” says RCSD Deputy Chief Harry J. Polis Jr., commander of the department’s Operations Division. “Law enforcement officers are peacekeepers first with the ability to escalate force when necessary, but obviously escalation is the last resort.”

According to Polis the challenge lies within the tactical commander’s ability to keep one’s team highly trained and ready to respond while always focusing on de-escalation.

“A fine line,” he says, and therein lies the mental and emotional dexterity required to be a SWAT team officer in the 21st century. Gone are the days of the iron-fisted approach to all tactical scenarios. Today’s paramilitary SWAT teams must be just as capable of peacefully diminishing or diffusing the threat as they are to forcefully eliminating it: Perhaps more so.

“You have to be able to unhesitatingly respond to any situation that arises with split-second laser-like precision, all the while focusing on de-escalation,” says Polis. “That’s not easy. That requires a lot of mental as well as physical conditioning, and the right kind of tactical officer which is why our Special Response Team screening process is so thorough, as is the process to become a basic deputy.”

“It’s a matter of striking the right balance in a tactical situation,” he adds. “Consequently, our Special Response Team regularly conducts scenario-based training in which they are taught the value of de-escalation all the while preparing the officer mentally to quickly escalate force if necessary.”

Technologies in the form of unmanned aerial vehicles (UAVs or drones), robots, and throw-phones used by hostage negotiators are but some of the ways in which law enforcement personnel including members of tactical teams are able to communicate with suspects and effectively respond to threats. Such supporting technologies aid tactical teams in diffusing threats, as do Crisis Management Teams (hostage negotiators) and Crisis Intervention Teams (joint teams between mental health professionals and specially trained deputies).

“Society does not like the way the hard iron-fisted approach looks anymore,” says Polis. “They like the thought of it, because most people derive comfort from the fact that they know there are those men and women who in the middle of the night are capable of extreme violence in the name of public safety. But they don’t want to see it.”

Polis adds, “How do we make that kind of response to a threat palatable and acceptable when society expects you to take a completely hands-off approach to that threat?”

Tactical response to a given situation is no longer simply what is legally justifiable. Public perception of what is justifiable is today equally important.

“Every officer on the street today is concerned with how the public will perceive his or her actions: Whether we are justified or not is in many ways irrelevant,” says Polis. “We have to always be right. And we have to be seen as right. That in-and-of itself is a huge challenge.”

A growing fear among some law enforcement leaders today is that though their subordinate officers may be completely justified in using an appropriate level of force, those officers might hesitate at a critical moment when engaging a threat. Not so at RCSD.

“Our deputies cannot – and will not – hesitate when it comes to employing the appropriate level of force to a given threat,” says Richland County Sheriff Leon Lott, who years ago served as a sniper on one of RCSD’s earliest SWAT teams. “This ability to differentiate between an immediate threat to one’s life or the life of others and a non-physical threat is a conditioned response stemming from long hours of intense training that begins with weeks during the entry-level phase and continues throughout a deputy’s career.”

How does a law enforcement agency operating in today’s fish-bowl culture, where everything is seen and recorded, function and effectively diffuse threats without hesitating to respond to threats against his or her own life or the lives of others?

“Strong leadership is key,” says Polis. “Sounds simple, but having a leader like Sheriff Lott who the patrol deputy and the SRT operator alike both know will have their backs is vital. No matter what happens, if one is legally justified in using force, Sheriff Lott will support them and their decision publicly. And they know that.”

Polis contends that is where other law enforcement agencies, nationwide, may in fact fall short or are in danger of falling short.

“No one would have questioned a police sniper eliminating the threat of the Las Vegas shooter who killed 60 people in 2017,” says Polis. “But what if it was a slightly different situation where the threat to public safety was not as clearly defined? Legal and necessary responses to threats even when they are not pretty, must be supported by elected officials, law enforcement leaders, and the public if law enforcement is to continue being effective in serving and protecting.”

Fortunately for RCSD and the communities it serves, Sheriff Lott made it a point 25-years-ago for his department to be community oriented.

“From day-one when the Sheriff was elected in 1996 and assumed office in 1997, his goal was to share the department with the community,” says Polis. “In other words, policing is a community approach. Always has been. That solid relationship with the community makes our work easier and we consequently have the public support we need.”

Creative training scenarios developed for Special Response Team operators are based heavily on after-action reports, reviews and evaluations of – best practices and mistakes made in – ongoing SWAT operations and counterterrorist-unit missions, worldwide.

RCSD’s Special Response Team also trains with and learns from those outside of the department. Training has been conducted with other police SWAT teams as well as the FBI’s regional teams, S.C. National Guard security forces, U.S. Army Special Forces operators and U.S. Navy SEALs.

As recently as Dec. 14, 2021, an active shooter training exercise was conducted by SRT with other local agencies – fire, medical, emergency management – on the campus of Columbia International University. RCSD was the lead responding agency.
[ https://whosonthemove.com/active-shooter-exercise-held-at-columbia-international-university/ ]